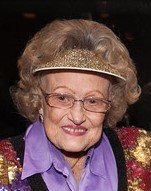 Doris Lorraine (Neu) LeMaster was born on January 13, 1932 at home to Laura Margaret (Waterman) Neu and Jacob Frederick Neu on their farm in Northern Kansas. Doris passed from this life on Thursday, March 26, 2020 at her home in Tulsa, OK at the age of 88. Doris was the youngest of five who were raised on a farm about six miles north of Washington, KS. Her primary education was at Scruby School, a one room schoolhouse about half a mile “uphill both ways” from her family’s farm. The summer of 1945, Doris was in town with her mother for supplies. They went into the dime store owned by Carl and Vera Fay Rosenkranz where she was introduced to a young man named Fred C. LeMaster. Fred chased Doris for two years before she agreed to go out with him. After graduating from Washington High School, Doris went to school to become an air traffic controller and a coder. J. Edgar Hoover offered her a position in Washington DC, even sending two agents to Washington, KS to perform background checks on her, her family and friends. The town doctor, and soon to be father-in-law, kept her in town by offering her a position at the newly built county hospital. Fred C and Doris married July 5, 1953, after Fred graduated from Phillips University in Enid, Oklahoma. That fall they moved to Kirksville, Missouri so Fred could attend Kirksville College of Osteopathic Medicine. In the spring of 1957 after his graduation, they moved to Tulsa, OK. Doris made a loving home for her family in Tulsa. She worked in Fred C’s office when needed and many patients became lifelong friends. Doris was also very active in the Lion Tamers, a club consisting of the wives of Lions Club members. She joined the Lions Club when women were finally allowed to do so and held several offices. For several years, Doris was the coordinator between the Oklahoma State Lions Club Foundation and the Leader Dogs for the Blind. She was active in the Lutheran church and volunteered for many years with the Oklahoma Osteopathic Hospital Guild. When the last of her three children entered high school, she began working full-time in Fred C’s family practice office. In the 1980s Doris fulfilled a lifelong desire to own a racehorse, purchasing Miss Okie Dancer from long-time family friends. After several years of racing the local circuits, it was brought to Doris’ attention that the original sale of the horse (prior to the family friends’ acquisition) was of questionable integrity. Doris would often laughingly say “There’s now a horse thief in our family!” Doris retired with her husband in 2000, spending their final years traveling and visiting family. Fred C’s passing in November of 2019 broke Doris’ heart. She put on a brave face, but without her “other half”, she finally gave in and went to join him. Doris is survived by her children, Frederick K. LeMaster of the home, Lorraine L. LeMaster of Stillwater, OK, and C. Douglas LeMaster and his wife, Raquel Tilghman-LeMaster and 1 granddaughter, Olivia LeMaster all of Stroud, OK. Due to the ongoing health situation in the world there will be no services at this time. A celebration of her life will be scheduled later. Viewing will be at Ninde Brookside Funeral Home, Monday 10am – 8pm. A private burial will be in St. Paul Cemetery Washington, KS. In lieu of flowers donations may be made to: Oklahoma Lions Eye Bank, 3840 N. Lincoln Blvd., Oklahoma City, OK 73105 https://www.oklahomalionseyebank.org/.