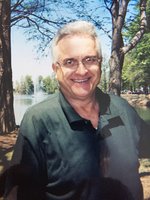 Jimmy Ray Roberts was born in Sallisaw, OK on January 14, 1941 to James Wesley Roberts and Josie (Reeder) Roberts. Jim passed from this life on Easter Sunday, April 12, 2020 in Tulsa at the age of 79. Jim was Vice-President and General Manager for Progressive Brass and later joined R & D Foundry where he remained until he retired. Jim joined the Indian Nations Pontiac Club and Pontiac Oakland Club International in October of 1988. Jim had many friends in the club and enjoyed the outings while driving his 1951 Pontiac. Jim enjoyed driving more than showing, but his '51 won many awards at various local shows including a couple of Best of Show Awards. Jim and his beloved car were featured in the Club Magazine where he was quoted saying, "I am looking for a cemetery that will let me be buried in my car." That did not come to fruition, however the '51 will remain in the family residing in Libby, MT just as his daughter promised. He was preceded in death by his parents; his wife, Judy Raye (McDonald) Roberts in 1994; a Baby Girl Roberts; siblings, Carl Roberts, Eugene Roberts, Roy Roberts, Muriel Cookson and Troy Roberts. He is survived by his daughter and her husband Laura and Jon England of Libby, MT; 3 grandchildren: Kaitlyn England and her husband Zeke Johnston, Philip England and Hannah England and sisters-in-law Fannie Roberts of Tahlequah, OK and Billie Roberts of Muskogee, OK. Private family graveside Floral Haven Memorial Gardens