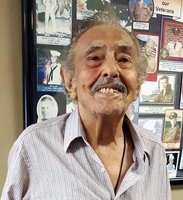 ACAR, ANTONIO “TONY”, 97, was born September 23, 1922 in Mexico. In his early 30s, working as a tour guide in Mexico City, he met an American tourist of about his age, Sue Bomford, who was traveling with her mother. He was drawn to her and eventually immigrated to Tulsa in the 50's, where he became a U.S. citizen, and later married her. The couple had one daughter, Elizabeth Anne, and were divorced in the late 1960s. A mechanical genius who could fix just about anything, Tony opened a television sales and repair shop in the late 1950s, which he operated for more than 30 years. Tony was a charismatic, charming, and generous man. Many who knew him looked upon him as a father or grandfather figure who offered encouragement and inspiration. Throughout his life, Tony was disciplined about his daily exercise routine and frequented the gym until COVID-19 closed it. He also enjoyed puzzles, games, and mental challenges that kept his mind sharp. He was a frequent participant in a nearby senior center, where he loved playing cards and games with others. He liked gaming at the casinos occasionally as well. Tony died May 25, 2020 in Tulsa, OK. He is survived by many loved ones and friends, including his daughter, Elizabeth Acar of Key West, FL and his niece, Josephine Ramsey of Wharton, TX. Graveside services will be held Friday, June 5th at 3:00pm at Floral Haven Cemetery. Ninde Brookside, 918-742-5556