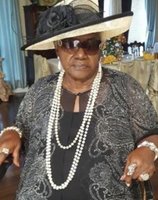 Jacqueline Tate Anderson was born December 29, 1934 in Edna, Oklahoma as the 10th of 12 children to Tena and Ed Tate. Mother, Father, sisters Glenola, Eulatsine, Earnastine, and brothers Thurman, MJ, Edmund, Basil, Toussaint, and Coporal preceded her in death. Kitty, as she was affectionately known, was a 1954 graduate of Beggs High School. She then attended Langston University for two years. Kitty was raised on a 200 acre farm, 3 ½ miles north of Beggs, Oklahoma. She was a member of the 4-H Club for 9 years, where she earned top honors in Home improvement, Dairy Preparation, Canning, Clothing, Food Preparation, Gardening, and Meat Judging. Kitty earned many awards: *1950 she won the C.R. Anthony Gold Medal for the “Best Bedroom Improvement Project” in Okmulgee County. * 1950 1st place and $500 in the Grand Champion Steer competition * 1953 1st place Meat Preparation Competition. * 1954 was her last year in 4-H club when won 3 Grand Champion Hefar Calfs Awards and number one status in the state of Oklahoma. Kitty said, “When we all grew up mother would can 900 quarts of food. We helped dad kill 4 hogs, 2 calves, 2 sheep, 2 goats, chickens, and ducks. This was enough food to feed 13 children and 2 adults during fall and winter months. We grew and sold peaches, watermelons, pears, blackberries, and chickens to Kelly Grocery Store. We made syrup for our neighbors and sold peanuts and hay.” “My parents taught me how to do everything you needed to do to operate a farm. We ground corn, picked cotton, sold cream to the store in town. I had to milk 12 cows and separate the milk before I went to school everday. My parents were always caring and sharing with our neighbors.” Kitty joined church at an early age at Tuskegee Baptist Church pastored by Rev. Greenlow. The family rode to church every Sunday in a flatbed wagon. While living in Tulsa she was a long time member of Antioch Baptist Church. In later years she moved her membership to Morning Star Baptist Church. In 1955 She Married George Wayne Anderson. To this union were born 4 children, Darnell, Darlene, Lydell Lamar, and Victoria(Vicki). After moving to Tulsa Kitty and George started Handy Andy Janitorial Services in 1965. As the business began to flourish kitty stayed home to take care of the home front while George worked the business. After a long 25 year marriage and divorce Kitty re-entered the workforce as a foster parent for Parents Anonymous. Kitty was also the caregiver for her mom and brother Tousssaint until they passed away. Feeling the need to exercise her culinary skills Kitty worked as a dietician at Southern Hills Nursing Home. She moved to Rest Haven nursing home for better pay and job security. In 1995 she earned a reward which read, “For Superior Achievement and Excellence of Performance in Dietary Services. After many years of service Kitty retired. We must also add, Kitty was a long time member of the Eastern Stars and Daughters of Isis. She Served as Grand Worthy Matron 1978-1980. Our family has enjoyed many delicious meals prepared by Ms. Kitty. With felling health, she moved to Texas to be closer to her children. She enjoyed spending time at the Desoto Community Senior Center where she was a member of The Golden Voices Senior Choir. She eventually needed nursing home care and was transferred from the hospital to Park Manor Nursing home in Desoto, Texas. She earned her wings on Monday June 21st. She leaves to mourn 4 children Darnell Anderson, Darlene Taylor, Lydell Lamar Anderson(and wife Hattie), and Victoria Anderson, brother James “Flukie” Tate, grandchildren Demtrius Woodard, Iris Esprit, Darnell Jr., Denzel and a host of great grandchildren, nieces, nephews, cousins and friends. Her Celebration of Life service will be held 1:00 p.m. Friday, July 3 at the Ninde Brookside Chapel. Ninde Brookside, 918-742-5556.