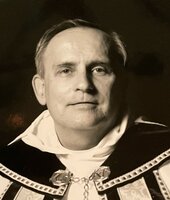 The Reverend Canon John Carter (Jack) Powers died at home on the evening of December 26. Jack lived a very full life. He was a caregiver to many and will be greatly missed. He left this life with grace and the world he leaves behind is a better place because of him. Powers was born in Tulsa on December 21, 1936. He graduated from Cascia Hall, received his B.A. from the University of Oklahoma in 1958 and his Masters of Divinity from General Theological Seminary, New York City, in 1962. He was awarded the James Mills Diocesan Fellowship for a year of graduate study at Pembroke College, Cambridge University, England in 1974-75. Fr. Powers led congregations at St. Luke’s Church, Idabel; Holy Family Church, Langston; St. Mary’s, Edmond and Trinity Episcopal Church, Tulsa where he served from 1975 to 1991. He worked for the Partnership for Service Learning in the Episcopal Church’s National office in New York City from 1991 to 1999. In retirement, Jack led the congregation at St. Bede’s in Cleveland, Oklahoma from 2000 to 2017. Active in both church and community life, Jack served on many diocesan and community boards and committees. With close friends and parishioners, Gene Buzzard and Keenan Barnard, he launched an effort to feed the hungry of Tulsa in a small garden behind an “iron gate” at Trinity Church. The Iron Gate is now in its own new facility and serves over 300,000 guests a year. Powers served on the boards of St. Simeon’s, Tulsa, the National Conference of Christians and Jews, the Association of Episcopal Colleges and Downtown Tulsa Unlimited as well as many others. Jack was preceded in death by his wife, Betsy Buck Powers who died in February, 2003. He is survived by his three children, Philip and his wife, Sarah and their son, August of Putney, Vermont; Kathryn (Kathy) of Tulsa; and John and his wife, Jill and their children, Alec and Emma of Tulsa. To those who knew Jack, and there were many, he will be remembered for his great sense of humor, his connection to people of all ages, his loyalty to his community of friends and his love of Trinity Church and the City of Tulsa. Donations in Father Powers’ memory may be made to: Iron Gate, 501 West Archer, Tulsa, OK 74103 https://www.irongatetulsa.org/donate, St. Simeons, 3701 North Martin Luther King, Jr. Boulevards, Tulsa, OK 74106 and Trinity Episcopal Church, https://www.trinitytulsa.org/give Services will be held at 2:00 pm on Saturday, January 8 at Trinity Episcopal Church and simultaneously online via the Trinity Episcopal Church Facebook page. Ninde Funeral & Cremation (918) 742-5556