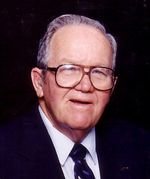 Please share a memory of William to include in a keepsake book for family and friends.
View Tribute Book
Robison - William Henry, Jr. was born on February 10, 1925 in rural Ft. Wayne, IN. He died at the home of his son, Billy, in Skiatook on March 29, 2006. He graduated from high school in 1943 and worked at the G.E. defense plant in Ft. Wayne, where he met his destined mate, Margaret M. Seidel. They married on August 13, 1944 and resided in Indiana till their move to Tulsa in 1952. They became members of Grace Lutheran Church, where Bill was active as a Sunday school president, trustee, usher, and a member of the men's club. He began a construction business in 1955 and worked in the U.S. and abroad. Bill enjoyed playing cards, especially bridge and pitch, square dancing, golf, bowling and fishing. He had a genuine love for people and was faithful in praying for those who made his "prayer list." The family takes comfort in knowing he is with family and friends in heaven. He is survived by his wife, Margaret (Peg) of the home, a daughter, Sandra Fickett of Mounds and her husband, Doug, a son, Bruce of Broken Arrow and his wife, Erika, and a son, William III of Skiatook and his wife, Dee. He also is survived by 7 grandchildren and 7 great-grandchildren and three brothers, Robert of Leo, IN; Charles of Davison, MI; and Kenneth of Corona, CA. and a cousin, Emily Lepper of St. Petersburg, FL. A memorial service will be held on Wednesday, April 5, at 2:00 p.m. at Grace Lutheran Church in Tulsa. In lieu of flowers, memorial donations may be made to Grace Lutheran Church, 2331 E. 5th Pl, Tulsa, OK 74104.