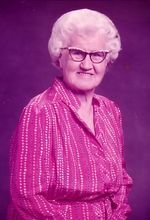 Please share a memory of Agnes to include in a keepsake book for family and friends.
View Tribute Book
Agnes Alma (Mills) Blalock, 90, died on Saturday, April 15, 2006 at her home in Tulsa, Oklahoma. Mrs. Blalock was born on August 22, 1915 in Pryor, Oklahoma the daughter of James Edward and Minnie Belle (Waybourn) Mills. She married William Blazer Blalock on April 20, 1933 in Tulsa, Oklahoma. She was a homemaker and a member of the Woodlake Assembly of God Church. She was preceded in death by her husband of 62 years on April 20, 1933. She is survived by her daughter: Faye Blalock; and numerous nieces and nephews. The family will receive friends from 6-8 Monday at the Ninde Whisenhunt Chapel. Services will be Tuesday, April 18, 2006 at 2:00 p.m. in the Woodlake Assembly of God Church. Interment will follow in the Rose Hill Cemetery.