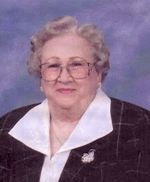 Please share a memory of Esther to include in a keepsake book for family and friends.
View Tribute Book
Esther Marie (Kuykendall) Watson, 85, died on Sunday, April 23, 2006 in Bristow, Oklahoma. She was born January 7, 1921 in Sallisaw, Oklahoma the daughter of Daniel Luke and Viola Gertrude (Coiner) Kuykendall. She worked for many years at the St. John Medical Center where she retired as a Nurse's Aide. She was also a member of the Trinity United Methodist Church of Tulsa. She married Warren Harding Watson on June 5, 1978 and he preceded her in death on March 11, 2003. She is survived by her son: Bill Barnes and his wife Neaoma of Bristow, OK and her daughter Shirley Bussey and her husband Winford of Welty, Oklahoma; Six Grandchildren and two Great Grandchildren. She was also preceded in death by her Grandson, Nathan Stice; sisters: Famous Davis and Iva Jones; her brothers: Jack Kurkendall, Omar Kuykendall, Jess Kuykendall and Lawrence Kuykendall. Services will be 10:00 a.m., Wednesday, April 26, 2006 in the Ninde Garden Chapel.