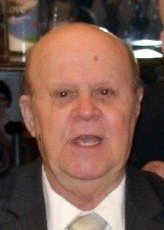 Richard attended school at Cherokee Elementary and graduated from Central High School in 1955.  Richard married Dianna Le Payton in February 1957 and divorced in 1960.  He married Melba Dean Green in August 1979 and they made their home in Tulsa.  She passed in 1991.  He worked for several paper companies retiring as Sales Manager for Butler Paper Company.  He always enjoyed woodworking, was an avid golfer and enjoyed spending time with his family.  He was a strong willed man but always willing to teach and give advice; sometimes even those who had not asked for it.

Richard was preceded in death by his parents; his wife, Melba; his brother, Dennis Looper; his stepdaughter, Kimberly Patrick; and his two nephews, Danny Looper and Dale Looper.  He is survived by his daughter and son-in-law, Denise & Nelson Sager; his son and daughter-in-law, Dean & DeAnna Looper; his stepson and his wife, Craig & Rhonda Green; his brother, Don Looper; 4 grandchildren; and 18 great grandchildren.

A memorial service will be held 2:00 p.m. Wednesday, March 14, at the Ninde Brookside Chapel.