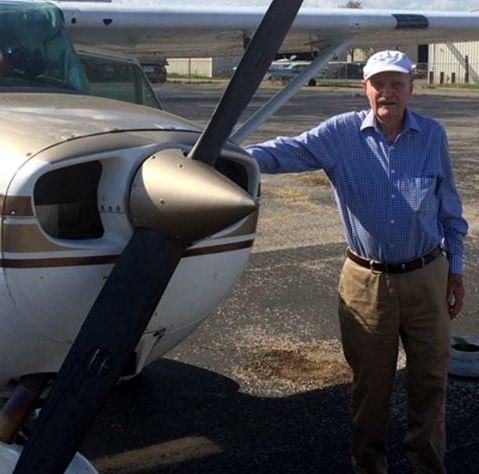 William Wallace Kyle, Jr., husband of Anna Lee (Thompson) Kyle, died peacefully at home on August 25, 2018, at the age of 91. William and Anna Lee were married for 56 years and had four children, 14 grandchildren, and 16 great-grandchildren.

He was raised in Tahlequah, Oklahoma, the oldest child of William Wallace Kyle, Sr. and Beulah Belle (Holland) Kyle. He lived in Tahlequah until joining the Navy during World War II and training as an aviation electrician. During his naval service in Washington DC he was assigned to examine captured aircraft for military advantage and aviation became a lifelong interest.  He learned to fly and piloted small aircraft his entire life, most recently flying on his 90th birthday.

After his service he obtained a Bachelor Degree in Petroleum Engineering at Oklahoma State University and began his 30+ year career with ExxonMobil.  He met his wife Anna Lee in Seminole, Oklahoma, where they married in 1950.  During his career he oversaw oil and gas projects in Oklahoma, Illinois, California and West Texas.  After his career with ExxonMobil, he and Anna purchased ranching assets in Oklahoma, which they operated for several years before moving to Lake Brownwood Texas, where they lived 20 wonderful years while he pursued his hobbies and worked for a small energy company. Throughout his life, he found joy in fishing, camping, fixing things, boating with his grandchildren and going out dancing with Anna Lee.

William was a lifelong Presbyterian and served several years as an elder in Mt Vernon and Carmi Illinois churches.  He was also a member of the Scottish Rite of Freemasonry in McAlester Oklahoma.

William was preceded in death by his parents; his wife Anna Lee; and his sister, Shirley Norton (nee Kyle).  He is survived by his daughter Sharon Lee Fitzjerrells (Bobby); his son Kenneth Wayne Kyle (Vicki); his daughter Debra Ann Swaney (Paul); and his son Michael Wallace Kyle (Robin); his 14 grandchildren; and his 16 great-grandchildren.

A memorial service will be held during October of 2018.

In lieu of flowers the family suggests contributions be made in William’s name to the Alzheimer’s Foundation of America.