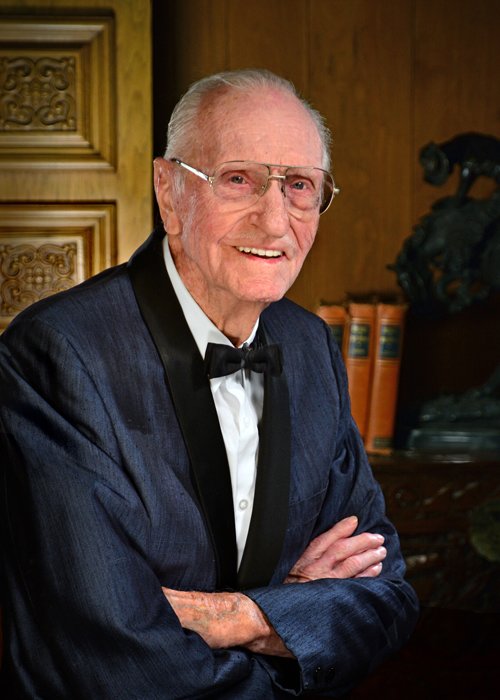 Earl Garner Conley was born May 14, 1918 in Huntington, West Virginia to Alfred Darwin “AD” and Nelle Marguarite (Elkins) Conley.  He passed from this life Sunday, November 4, 2018 at the age of 100.  Earl’s family moved to Tulsa when he was 13 and he was a 1936 graduate of Tulsa Central High School.  Earl then attended the University of Tulsa, where he received his Bachelor of Science degree in chemistry and geology.

Earl served in the US Army during World War II, rising to the rank of lieutenant.  Upon his honorable discharge, he returned to Tulsa and began his career using his chemistry training in the development of building materials.  He pioneered uses of epoxy in the early 1960s, researching and developing its use in building construction.  He formed Research and Manufacturing Corporation, developing exterior walls and architectural facade systems using, among other materials, crushed granite, marble and obsidians embedded in his special formulas of modified epoxy.  His systems were included in many local construction projects, including one of the early structures for Tulsa Vocational-Technical School, some facades, walls and architectural elements for Oral Roberts University and the original crushed marble walls of the Thomas Cadillac showroom on Memorial Dr.  He sold that business and started Product Development Corporation, pioneering, developing and manufacturing synthetic stucco materials for use in both commercial and residential construction.  Earl then sold that company but remained a consultant in research and testing for construction products.  In both endeavors, Earl was a caring and kind employer.

Earl an early member of the Tulsa Men’s Club which formed in 1949 and remained active in their meetings, dances and programs well into his 90’s.  Earl was an excellent bowler who regularly participated in the TMC bowling league.

Earl was preceded in death by his son, Steven Earl Conley and his wife, Madelyn Conley.  He is survived by his step-daughter, Diane McCormack and her, John.

Share Your Memory of
Earl
Upload Your Memory View All Memories
Be the first to upload a memory!