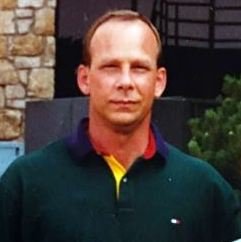 Matthew Ernissee was born February 13, 1957 in Tulsa, OK to Richard & Sheila (Hall) Ernissee and passed from this life in Oklahoma City, OK with family and loved ones at his side on December 28, 2018

Matthew attended school in Tulsa, OK and New Orleans, LA.  He graduated from Tulsa Central High School before enlisting in the Air Force where he became a firefighter and served with distinction.  He later worked in Safety at the VA Hospital in Oklahoma City.  His last job was at Tinker Air Force Base as an aircraft mechanic.

Matthew successfully completed a 3 year treatment for cancer.  He was an accomplished wood worker, artist, swimmer and a bicycling enthusiast.  He loved the outdoors and everything about it.

He cared deeply about everyone in his life and helped anyone he could.  He was generous of heart and giving in spirit.  Matthew will be warmly remembered by those whose lives he touched.