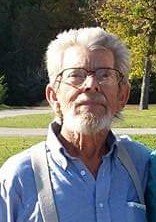 George Lee Wallis was born on August 28, 1939 in Muskogee, OK to John Wilson Wallis and May Olive (Burress) Wallis.  George passed from this life at the age of 79, on Thursday, February 14, 2019 at his home in Tulsa, surrounded by his family.

George lived a very full and vibrant life. And did everything on his terms. There was never a dull moment when you were around him, from childhood until the day he passed.

He spent most of his life in Tulsa. After graduating from Central High School, he joined the U.S. Marine Corps. There, he was an accomplished competition sharpshooter, something he was extremely proud of.

After his discharge, he worked with his father, Wilson Wallis, and then for himself at Wallis Paint and Remodel until he retired. He also trained racehorses for many years.

In 1964, he married (Susie) Janice Jones, the one true love of his life. They lived mostly in the Tulsa/Sapulpa area. They had a fun-filled, never boring life together. They shared lots of interests: fishing, camping, bowling, dancing, float trips, playing horseshoes, traveling, gambling, and gardening. At the young age of 64, George became an avid golfer. He even achieved four (witnessed) holes-in-one!

He had one daughter, Ginger Luster, and her husband, Jeremy. He was a loving and fun father. He liked to always be actively involved in whatever Ginger and her friends were doing from the time she was very young and throughout adulthood. He was the dad that everyone liked to be around.

He was also blessed to have and enjoy the presence of eight great-grandchildren. They brought him so much joy in his final years. They are: Alleehana Brewer, Caleb Brewer, A.J. Brewer, Mayson Brewer, Ryleigh Lance, Camden Lance, Londyn Lance, and Everly Tanton

George befriended many and always wanted to help anyone in any way he could.

He spent his last days on earth surrounded by those he loved, laughing, telling stories, and saying goodbyes. He left this earth peacefully knowing he had left nothing unfinished.

He was preceded in death by his parents and a son, Lee George Wallis.  George is survived by his wife, Janice Gayle “Susie” (Jones) Wallis of the home; a daughter and son-in-law, Ginger and Jeremy Luster of Tulsa; a brother, Harold Wallis of Catoosa, OK; 5 grandchildren and 8 great grandchildren.

The family will receive friends Monday 5-7PM at the Ninde Brookside Funeral Home. A funeral service will be held 10AM Tuesday, February 19, 2019 at Ninde Brookside Chapel at 3841 S. Peoria Ave. followed by a private family committal at the Vernon Cemetery in Coweta, OK.