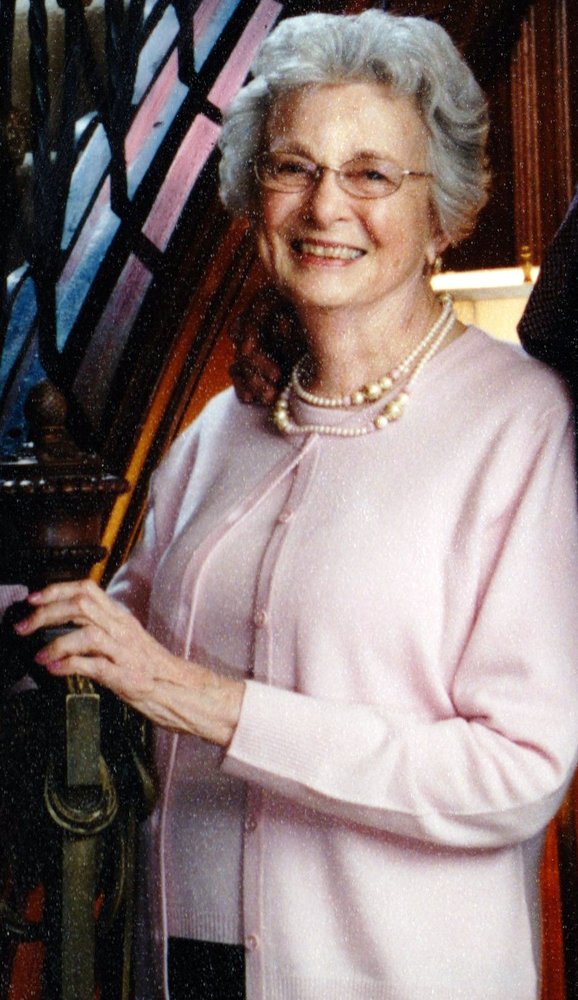 Plant a Tree
Share this Tribute:
Share Obituary:
Share Your Memory of
Clare
Upload Your Memory View All Memories
Be the first to upload a memory!

Clare Caldwell was born on May 3, 1928, and passed away on July 21, 2019 at the age of 91.  She was born in Milburn, OK, to Clarence Monroe Hoard, DVM, and Gorda Frances Hoard.  Dr. Hoard died a few months after Clare was born, and she was raised by her single mother as an only child.  Clare and her mother moved to Durant, Oklahoma before Clare started school, and Clare graduated early from Durant High School in 1945. She then attended Oklahoma College for Women in Chickasha, where she majored in chemistry, and was Freshman Queen.  In 1946, she transferred to Southeastern State College in Durant, where she continued her studies in chemistry and was crowned Homecoming Queen.

She married William C. (Bill) Caldwell, former WWII Air Force B-17 pilot and POW, on May 25, 1947, and they remained in Durant where Bill co-owned Caldwell’s Groceries.  In 1948, their daughter, Nancy, was born, and in 1950, their daughter, Marian, was born.  In 1951, they moved to Sherman, TX, the site of Perrin Air Force Base, when Lt. Caldwell was recalled for the Korean War. In 1952, they were transferred to Laredo, Texas, where Bill was stationed at Laredo Air Force Base.  In 1953, the young family moved back to Durant and Bill joined New York Life Insurance Company. Clare was active in the Durant Jr. League, serving as president.  In 1954, Bill was transferred by New York Life to Tulsa, where their son, William Clare (Buddy), was born in 1957.  They were active members of University United Methodist Church, and later of New Haven United Methodist Church.

Clare enrolled in 1963 at the University of Tulsa, where she graduated with honors in 1965 with a degree in English literature and a teaching certificate.  She began her teaching career in 1966 at Nimitz Junior High School, followed by Will Rogers High School where she taught until 1975, when she took early retirement.  In 1979, Clare and Bill moved to a home on 10 acres north of Sand Springs, where they enjoyed hosting family and friends.  Clare came out of retirement in 1983 to teach English at Tulsa Technology Center for three years.  During their 35 years in Sand Springs, they were active at Sand Springs United Methodist Church.

Clare was a bright, beautiful and fun-loving lady, who treasured her family and friends.  She enjoyed playing bridge, and played in several bridge clubs with long-time friends.  She was also a voracious reader and crossword puzzle solver.

In 2014, Clare and Bill moved to Burgundy Place Senior Living in Tulsa, and in 2018, they moved to Legend Assisted Living - Tulsa Hills.  Earlier this year, they celebrated their 72nd wedding anniversary.

The family would like to thank John Henning Schumann, MD, the staff at Legend Assisted Living – Tulsa Hills, and Hospice of Green Country for their kind and compassionate care.

Clare will lie in state from 10-8 p.m. Thursday, July 25 with the family receiving friends from 5-7 p.m. at Ninde Brookside Funeral Home.  Services will be held at 1:30 pm on Friday, July 26, at Boston Avenue United Methodist Church, followed by a reception at the church and burial at Memorial Park Cemetery.  The family has requested that memorial donations in Clare’s name may be made to the Alzheimer’s Association, Hospice of Green Country or a charity of your choice.