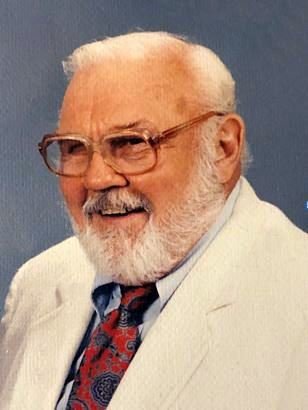 James Edward (Jim) Eslick, Jr. passed away peacefully November 13, 2019 with family members, including his loving wife of 72 years Jane, at his side. Born April 28, 1925 in Springfield, MO Jim was the eldest of eight children.

Jim and his paternal family moved to Monett, MO in the late 1930’s and upon graduation from high school he enlisted in the US Navy in 1944. After his honorable discharge in June 1946 he returned to Monett where he later married Wilma Jane Means of Pierce City, MO, on August 3, 1947. Jim’s connection to Monett was greatly influenced by his love for his surrogate parents Charles and Edna Main of Monett, and the extended family and friends he and Jane shared while living there.

In 1952 Jim accepted a position with the US Jaycees and moved his family to Tulsa. He later worked for the Tulsa newspapers in advertising sales, and as a self-taught horticulturist at the Tulsa Rose Gardens. A lifelong St. Louis Cardinals fan, and an accomplished amateur athlete,  Jim continued participating in competitive sports until losing an eye in an accident.  After the accident Jim directed his love of sports to coaching and remained a fixture in Tulsa junior and amateur baseball and football for decades.

A memorial service will be held at 2:00 p.m. Wednesday, November 20, at the Brookside Church, 3615 S. Peoria, Tulsa, OK and he will be laid to rest in the International Order of Odd Fellows Cemetery in Monett, MO 2:00 p.m. Friday, November 22.