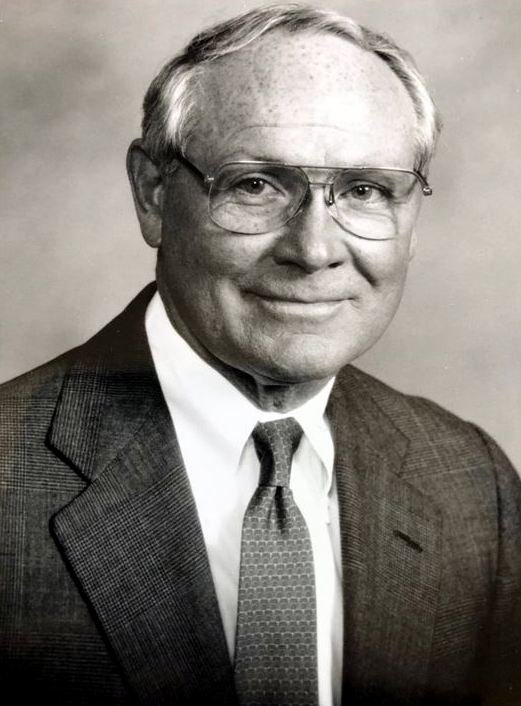 John Harold Santee, called “Jack” by friends, was welcomed into the world by Pauline and Harold Santee on a snowy Sunday morning at the tiny Catholic rectory in Skiatook, Oklahoma. The date was January 11, 1931, a birthday that Jack shared with his maternal grandfather.

Last week, on the morning of December 6, surrounded by family, and a month shy of his 89th birthday, Jack passed peacefully from this world.

Jack graduated from Skiatook High School in 1949 and considered himself fortunate to be awarded a football scholarship that would allow him access to a college education at The University of Oklahoma.  This was the beginning of a lifelong love for the university, which included a seven-year tenure on the Board of Regents.

Throughout his life, Jack’s love of sports never waned. In 1950, he was a proud member of the first Oklahoma football team to win a national championship.  Desirous of pursuing a career in coaching after college, Jack obtained a B.S. in Education in 1953 and subsequently was hired as a Graduate Assistant to legendary Oklahoma football coach, Bud Wilkinson.

However, Jack struggled to balance his love for coaching and teaching with the uncertainties of the profession. After some soul searching, Jack entered OU Law School at a friend’s suggestion.  While in law school, he found many parallels between the practice of law and the complexities of coaching.  He continued to coach throughout law school until graduating in 1956.

Jack subsequently embarked on an outstanding legal career that spanned over 60 years.  He joined the legal department at the National Bank of Tulsa, then served as a federal clerk to Royce H. Savage, U.S. District Judge for the Northern District of Oklahoma.  In 1958, following his clerkship, Jack started his practice at the firm of Martin, Logan, Moyers, Martin & Hull. He remained at the firm until his retirement in 2016.  Jack loved the practice of law and the lifelong relationships he built with his clients, members of the firm and the legal community.

Though busy with his law career, Jack did not leave coaching behind. He held many coaching positions, including being appointed the very first head football coach at Bishop Kelley High School.  We now know why Bishop Kelley’s colors are similar to OU’s crimson and cream. Over the subsequent decades, Jack coached hundreds of children at elementary, middle and high school teams throughout the city.  As Jack used to joke, “Lawyers look at me as a coach, while the coaches look at me as a lawyer.”

In 1959, Jack married Helen Mishler and they began their life together. They shared three children, Catherine, John and Stephen. Though Jack was proud of all his professional achievements and his many days and evenings spent tutoring young men on the gridiron, what brought him the most joy was his family. He was a patient, devoted and loving father.

A humble servant, Jack generously and quietly supported organizations and individuals throughout the communities and state of Oklahoma.  Jack’s tender heart, kind spirit, honesty and integrity inspired those around him.  He loved to dance, sail, read and listen to music.  His favorite artist, Jimmy Buffet, said it well, “Some of it’s magic, some of it’s tragic, but I've had a good life along the way.”

Jack is survived by Helen, his wife of 60 years, his children Catherine and her husband Eric Hughes, John and wife Karen Santee, Stephen and wife Amy Santee; his grandchildren, John-Philip, Alexander, Caroline, Sarah, and namesake Jack; his brother Bob Santee and wife Betty, his sister Ann and her husband Mike McAfee of Missouri City, Texas, sister-in-law Marilyn Ats of Wilbraham, Massachusetts, and many nieces and nephews.

Memorial services will be held at 11 a.m. on Saturday, December 14, at Christ The King Catholic Church, 1520 South Rockford in Tulsa, Oklahoma. In lieu of flowers, donations may be made to Catholic Charities of Eastern Oklahoma, P.O. Box 580460, Tulsa, Oklahoma 74158, or a charity of your choice.