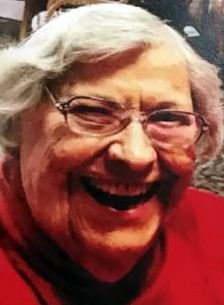 Please share a memory of Alvina to include in a keepsake book for family and friends.
View Tribute Book
Alvina Viola (Rickner) Truelove, the oldest of five children, was born April 18, 1923 in rural Ottawa County, Miami, Oklahoma on her Aunt Mary’s Indian Allotment to Ray Everett Rickner and Sophronia Ann Captain Rickner. She passed away on September 29th , 2020 in Tulsa, Oklahoma. Alvina graduated from Wyandotte High School in 1941 and attended William Penn College in Oskaloosa, Iowa for one year before she married Leonard Raymond Truelove on January 25th 1943. Leonard passed away September 26th, 2004 after 61 ½ years of marriage. She was preceded in death by her son Micheal LeRay in 1972, her sisters, Raydean Francisco and Betty Kline, brothers-in-law, Marvin Kline, Merle Moore, and James Francisco. She is survived by sons, Tom Truelove and wife Pam of Tulsa, James Truelove and wife, Mary of Richardson, Texas, and daughter, Rebecca (Kit) Truelove and husband James Brown of Porter, Oklahoma. She is also survived by her brother, Don Rickner and wife, Kathy of Tulsa and very special sister, Joyce Moore of Tulsa. She is survived by seven grandchildren, Kevin Truelove and partner, Janell Browne of Tulsa; Brian Prince and wife, Rana of Broken Arrow; Eric Truelove and wife Amanda of Waco, Texas; Susan Simianer and husband Steve of Paonia, Colorado; Shana Howland and husband, Eugene of Edmond, Oklahoma; Tiffany Kelly and husband Jonathon of Garland, Texas; and Marc Truelove of Dallas, Texas. She is also survived by 11 great grandchildren: Andy, Abby, Emily, and Jacob Truelove; Joel and Riley Simianer; Kristen and Ryan Kelly; Cassidy Johnson and Amanda Howland; and Kylie Prince. She is also survived by nieces, nephews and their families who were loved very much and gave love in return.
Print
Monday
5
October