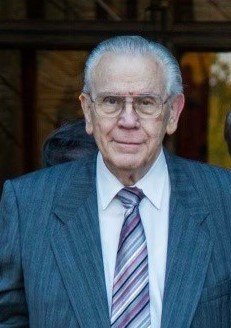 Please share a memory of Demetrius to include in a keepsake book for family and friends.
View Tribute Book
Demetrius John Tsaras was born on February 15, 1931, in Drama, Greece, to John George Tsaras and Stella Yfantopoulou Tsaras. Demetrius passed from this life on Thursday, January 14, 2021, in Tulsa, OK, at the age of 89. He is survived by his wife of nearly 60 years, Yvonne; his children and their spouses, Fr. John & Pres. Vicky Tsaras of Oklahoma City, OK, Joy and Stephen Konstans of Dallas, TX, and Paul & Stevi Tsaras of Tulsa, OK; his sister, Roula Murray of Darlington, England; six grandchildren, three great grandchildren and many nieces and nephews. Demetri lived an amazing life indeed. He lived through the Nazi occupation of Greece during WWII and trained to fight with the resistance as a young boy. He played soccer in the English Premier League for Sunderland while he attended Durham University in Durham, England. He came to the United States on the Andrea Doria, not knowing a soul, barely able to speak the language and with little money in his pocket. He worked nights to put himself through school at NYU, where he majored in math and took a computer programming class as an elective. That class led to his career in management information systems. His career took off at American Airlines, where he brought Sabre System from New York to Tulsa in 1966. From there, he went on to become a senior executive at American Airlines, Olympic Airways, Hertz and American President Lines. He was an active member and faithful supporter of Holy Trinity Greek Orthodox Church in Tulsa, serving as parish council president, a board member and on many church committees over the years. Yet, for all he did and accomplished, his heart was always for Christ, and his prized possession was his family. No matter what, he always did what was best for his wife, children and the community that he loved so much. Always a genuine gentleman, there wasn’t a single day that passed that he didn’t express his love, do his best to help and show kindness to all. He will always be remembered for his generous spirit, his playful sense of humor, his great stories of old, his beautiful voice and his sweet tooth, especially for anything cherry. He was a hugger and a hand-holder and was always quick to crack a joke. He always had a song on his lips and a smile on his face. While he will be dearly missed, his family rejoices that he is now home with his Lord and Savior Jesus Christ. The viewing will be Monday, January 18 at 10:30 a.m., with the trisagion and funeral to follow at 11 a.m., at Holy Trinity Greek Orthodox Church in Tulsa. Interment at 2:30 p.m. at Rose Hill Burial Park in Oklahoma City, OK. In lieu of flowers, donations may be made to Holy Trinity Greek Orthodox Church Building Fund, 1222 S. Guthrie, Tulsa, OK 74119.
Monday
18
January

Look inside to read what others have shared
Family and friends are coming together online to create a special keepsake. Every memory left on the online obituary will be automatically included in this book.
View Tribute Book
Share Your Memory of
Demetrius
Upload Your Memory View All Memories
Be the first to upload a memory!
Share A Memory
Plant a Tree