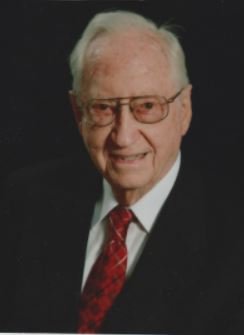 Please share a memory of Lloyd to include in a keepsake book for family and friends.
View Tribute Book
Heaven gained a truly remarkable man on January 15, 2021. He was an exceptional husband, father, grandfather, great-grandfather, Marine, and disciple of his Lord Jesus Christ. Lloyd Farron Dinsmore was born on April 8, 1923, to Susan and Grover Dinsmore at Maysville, Missouri at home on the farm. The youngest of 8 children. All have preceded him in death. Growing up in the depression years, his family was rich in relationships, as memories of hard work and devotion to family influenced the man he was to become. He joined the Marines in 1943 and headed to the Marine Training Center in San Diego, California. In his memoirs, he writes, “on the evening of December 30, 1943, I departed by train from Kansas City’s Union Station with a fond farewell and a treasured photograph of a sweet young lady, Miss Lois Jean Colter (who was later to become my wife in 1946).” His military assignments took him from California to Maui, to the South Pacific, Saipan, and ultimately Iwo Jima. He was part of the American invasion of Iwo Jima on February 19, 1945, enduring 26 hellacious days and nights in the Battle of Iwo Jima. VJ Day, August 12, 1945, was a day of pure joy compared to their normal military schedule. During a 30-day leave shortly after this, Lloyd and Lois became engaged on Christmas Eve, 1945. Lloyd and Lois were married June 30, 1946. From this union came two children, Steve and Linda. After returning to civilian life, Lloyd held several positions of employment with the United States government. For several years, he was an investigator for the U.S. Department of Labor, working in Kansas City and then Houston, before retiring and moving to Tulsa, OK, to be closer to family in 1982. In his retirement years, he and Lois volunteered at City of Faith/Cancer Treatment Center for 25 years. They also enjoyed numerous trips, visiting all 50 states and about 15 foreign countries, making friends wherever they went. They were faithful members of Evangelistic Temple / Spirit Life Church for nearly 40 years, devoting much time to church activities and work for God’s Kingdom. Lloyd is survived by his loving wife of 74 ½ years, Lois Jean, of the home, son Steve (Terry) of Bentonville, AR, and daughter Linda (David Dyson) of Tulsa; 5 grandchildren: Michael, Ben, Nathan, Aaron, and Laurel (and spouses); 12 great-grandchildren; and a host of nieces and nephews. A committal service will take place Wednesday (Jan 20) at 10 a.m. at the Ft. Gibson National Cemetery. A Memorial service will be scheduled for a later date at Spirit Life Church in Tulsa. Ninde Brookside, 918-742-5556

Look inside to read what others have shared
Family and friends are coming together online to create a special keepsake. Every memory left on the online obituary will be automatically included in this book.
View Tribute Book
Share Your Memory of
Lloyd
Upload Your Memory View All Memories
Be the first to upload a memory!
Share A Memory
Plant a Tree