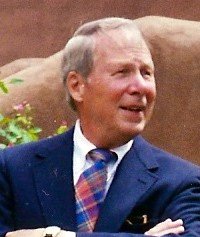 Please share a memory of James to include in a keepsake book for family and friends.
View Tribute Book
James Whitfield Brownlee passed away peacefully Tuesday, January 19, 2021. Jim was born October 7, 1925 in Tulsa at his childhood home on South Newport Avenue to William Allen and Frances (Hunt) Brownlee. He was the second of four children, joining older sister Mary Fran (Gotwals) and younger twins, Jody (O’Meilia) and Bob. Jim attended Marquette School and graduated from Tulsa Central High School in the Class of 1943. After one semester at the University of Arizona, he enlisted to serve his country in the U.S. Air Force as a control tower operator in North and Central Africa. After the war, Jim earned his degree in Journalism from the University of Tulsa in 1949. In 1954, Jim married the love of his life, Margaret Rose (Peggy) Brennan, daughter of Gerald L. and Mae W. Brennan. Together, they raised their four children, Mary Morrell, Anne Bendel, Patty Heckenkemper and John. Jim worked for Penn Well Publishing for 42 years, serving in multiple leadership roles with assignments in New York and Tulsa. He earned respect and friendship among his many colleagues over the decades prior to his retirement in 1991. He and Peggy were both dedicated members of the community. Jim served on the Board of Directors of Philbrook Museum of Art and the advisory boards to both the Tulsa Historical Society and the Friends of Tulsa Public Library. They also loved to host festive dinner parties for their many good friends and their growing family. Jim was so excited when they bought and moved into “Peggy’s Irish Cottage,” their home designed by notable architect, Charles Dilbeck. Those fortunate to cross paths with Jim, family, friend, and acquaintance alike, all agree that he was a true gentleman. He was loyal, humble, kind, thoughtful, and possessed a great dry sense of humor and a keen eye for style. Jim was a man of great faith, attending daily Mass as a lifelong member of Christ the King Church. He loved to do yardwork and had a special place in his heart for the many family dogs. While he enjoyed many trips over the years, he had a special fondness for the mountains of Colorado. Jim lived a full, vibrant life with many interests, but family ALWAYS came first. He loved and doted on his grandchildren and great-grandchildren. He seemed to wake up every day and ask himself, “How can I help my family today?” He found countless ways to help, big and small. He was known to load up his lawn mower and just show up to take care of someone’s yard. He could anticipate ways to help before people realized they even had a need. Jim, the gentleman, set quite a standard and legacy for his family. Jim was preceded in death by his parents, his three siblings, his wife, Peggy, his son, John, and his son-in-law, Jeff Morrell. He is survived by his daughters, Mary, Anne, and Patty; son-in-law Randy Heckenkemper; grandchildren, Sam and Joe Morrell, Matt Bendel and wife Connie, Lizzy Eikenberry and husband Dan, J.P. Szafranski and wife Maggie, Will Heckenkemper and wife Laura, Kate McCumber and husband Aric; great-grandchildren, Jack, Luke, Ben, A.J. and Matthew Szafranski, Henry Heckenkemper, and Nora Eikenberry. The family will have a private burial service and hopes to hold a memorial service for Jim when public health conditions improve. In lieu of flowers, friends may contribute to the Christ the King Educational Endowment Trust, 1520 S. Rockford Ave., Tulsa, OK 74120.