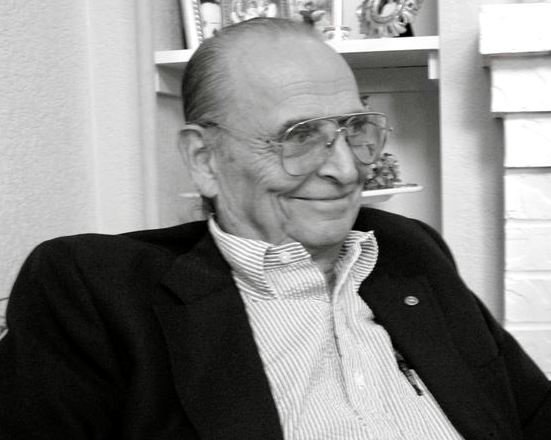 Please share a memory of John to include in a keepsake book for family and friends.
View Tribute Book
John Edward Meyer was born August 23, 1926 in Hoisington, KS to John Jason and Helen Winifred (McIlwaine) Meyer and peacefully passed from this life on January 24, 2021, with family by his side. John grew up in Hoisington and spent summers working on the family farm. After their courtship as high school sweethearts, John married Margaret Jean Lutz. John and Margaret remained married for 61 years until her death in 2009. In 2010, John found love again and married Margaret Eileen (Sherry) Sims. Upon graduating high school, 17 year-old John and his father drove to Kansas City where he enlisted in the Navy. He served as a radio operator during WWII on the USS Sebec from 1944-1946. After being honorably discharged from the Navy, John attended the University of Kansas where he was a proud member of the Delta Upsilon fraternity and graduated with a degree in chemical engineering. He dedicated his career working for Cities Service Oil company, where he became an elected member of the Board of Directors before his retirement in 1982. John, a dedicated member of Boston Avenue Methodist Church, spent his retirement years traveling the world with Margaret and their friends, engaging in entrepreneurial pursuits, managing the family farm in SW Kansas, taking road trips on his Harley, sailing on Grand Lake and supporting his beloved Jayhawks. He was a longtime member of Southern Hills Country Club and participated in many of the club’s golf tournaments. He particularly enjoyed attending the Masters Tournament with his son Jack, which was a much anticipated annual event for them both. John is preceded in death by his first wife, Margaret; sister, Winifred (Meyer) Pinet; and grandson, Daniel Caputo. He is survived by his wife, Marge (Sherry) Meyer; her 4 children, Eileen Hulsey (Benjamin), Anne McNearney, Claire Trinidad (Kenneth), Matthew McNearney (Lori) and their beautiful families; his daughters, Cindy Meyer, Jan Nicodemus (Ray) and Betsey Wieding (Jim); and son, Jack Meyer (Linda). Also surviving are his grandchildren, Joe Caputo, Lisa Crawford, Katie McAtee, Briana Peterson, Megan Hart, Katie McCollam; and seven great-grandchildren, Joey and Kylie Caputo, Asher and Thea Peterson, Amani McCollam-Mudd, and Azie and Rhys Newton. A private family service will be livestreamed 11:00 a.m. Tuesday April 6, 2021. Friends may view the service at https://www.bostonavenue.org/worship/life-events