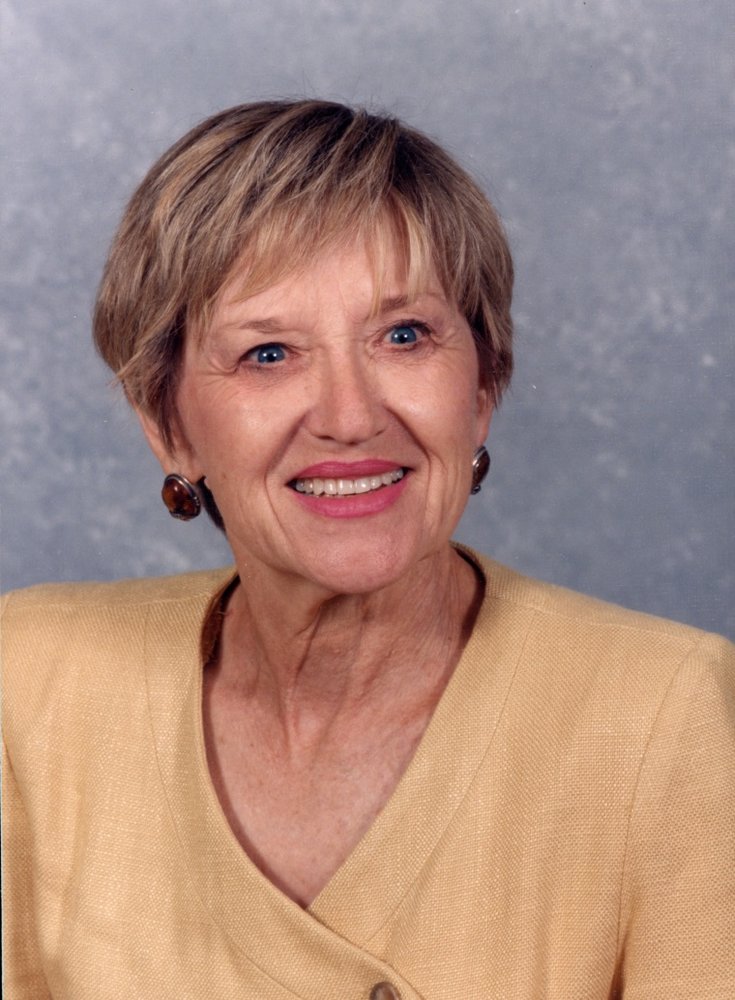 Please share a memory of Marcia to include in a keepsake book for family and friends.
View Tribute Book
Marcia Lee Jones was born October 14, 1930, in Perry, Oklahoma, to Gertrude Cecilia (Marshall) Jones and John Wright Jones. She succumbed to COVID 19 on January 21, 2021, at the age of 89. Marcia is survived by: her daughters and their spouses, Cindy and Brian Sullivan, Susie and Bob Westbrook, Dru and Ken McQueen, Lisa Marshall, and Jan and Steve Gawey; 13 grandchildren, and ten great grandchildren She was preceded in death by her infant daughter, Mary Kay, her husband of 65 years, Richard Marshall, her parents, her brother Matt Davis, and her brother, Ed Jones. Marcia’s early life was shaped by her mother’s family, including her grandmother, two aunts, and five uncles. They were a lively and irreverent crew whose endeavors allegedly included a family band, revenge chicken killings, and unlawful banana acquisitions. Their tutelage helped her survive Catholic elementary school, where the nuns failed to appreciate the family traits of liveliness and irreverence. After moving to Oklahoma City as a teenager, Marcia graduated from Classen High School, then attended the Mercy Hospital School of Nursing. She continued working as an RN at Mercy, where she was nicknamed “Runt”, and known for her failure to unconditionally revere doctors. It was at Mercy that she met Richard Marshall, a second-year medical student who was unfazed by her lack of fealty. They married in 1952, and had six daughters by the end of 1958. As a child of the Depression, Marcia learned to make a lot out of a little, a skill that was necessary with a large family and a husband still in indentured-servitude internships. She ran the household with amazing discipline and ensured that their children were well-behaved, well-fed, and well-read. She developed many do-it-yourself skills, including, paperhanging, sewing, hairstyling, ear-piercing, cat midwifery, intramural rodent removal, landscaping and bricklaying. A meticulous housekeeper, Marcia instilled in her children a life-long devotion to bleach, Bluettes rubber gloves, and bladed cleaning tools. Marcia a/k/a “Imelda” amassed an impressive collection of shoes, animal-themed décor items, and a large fabric stash. She enjoyed reading, classic movies, needle arts, and mammalian pets. Her animals included two cats and a dog intentionally acquired and many others that wandered up or were “donated” by well-meaning family members or complete strangers: dogs Hans, Max, Greta, Clio, and Kelly; cats Grandma, Lady, Junior, Zsa Zsa (plus kittens), Meanhead, Grayboy, Fannie, Ming, Bird, Tuffy, Joe, and foster cat Norma Jean (plus kittens). Marcia was the founder of the Martha Club, a family group studying the ideals of both Martha Stewart, who gave the world an ambitious vision of what one woman can accomplish by herself with mere millions of dollars and a large staff, and Martha of the New Testament, who did all the household chores while her sister sat at the feet of Jesus. The members of the club, Marcia and her daughters (referred to as the Coven by one son-in-law) made a regular effort to defy the Martha principles by leaving their household duties, enjoying full-service hotels and restaurants, shopping to obtain goods made by others, and reciting the club motto: “If one of us has to be unhappy, it might as well be you.” With her flair for decorating and her organizational and culinary skills, Marcia was the host and matriarch of family dinners for decades. Her dinners were popular with family members, as well as friends of her children and grandchildren, who seasonally append “Marshall” to their surnames and continue to attend family gatherings. A private family service has been scheduled. In lieu of flowers, the family suggests donations in Marcia’s memory to the Oklahoma Alzheimer’s Foundation, the Oklahoma Animal Alliance, or Asbury Methodist Church in Tulsa, where she and Richard were long-time members.