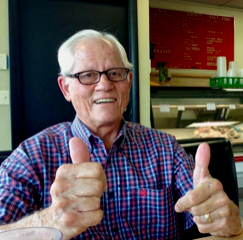 Please share a memory of Richard to include in a keepsake book for family and friends.
View Tribute Book
The end of the story, to hear him tell it. Richard Lindsay Wheatley, Jr. lived a full and thoroughly enjoyable life. He was born in 1933 in Vinita, Okla., the oldest child and only son of Richard Wheatley Sr. and Mary Hooks Wheatley. His parents and younger sister, Elizabeth, predeceased him, as did two of his sons, Richard Wheatley III and Matthew Wheatley, and a premature grandson. His life story took him from Vinita to Shattuck Military Academy in Faribault, Minnesota then on to the University of Oklahoma (Phi Gamma Delta) where he earned bachelor’s and juris doctorate degrees. Immediately following law school, he joined the Army and graduated from Army Ranger school at Ft. Benning, Georgia in 1957. Upon his return from Ranger training, Dick joined his dad in the Wheatley Law Firm in Vinita. He was elected as a State Representative in 1959 and served one term before returning to his legal practice in 1961. Following his stint in the Legislature, he was appointed by Governor Howard Edmondson to serve as the first Administrator of Consumer Credit for the state of Oklahoma. After his tenure, he moved to Stillwater as the Chairman and CEO of University Bank. While at the bank, he served on the Consumer Advisory Council to the Federal Reserve Board of Governors. Politics was never far from his mind, however. Dick began a lobbying career in 1982 that continued until the very end of his life. He focused on banking initially, then added a long list of other industries. He knew how to begin with the end in mind. He was a master at knowing all the consequences of a bill under consideration. His focus most recently was promoting the conservation and infrastructure of water. Dick firmly believed water is one of the most important resources in the world, and he became one of the more knowledgeable experts on the topic. You only had to give him an opening and the next two hours were a series of facts and descriptions of water tables, aquifers, cost breakdowns and needs for every community in Oklahoma. Dick leaves behind his partner and wife, Lynn, as well as children and grandchildren – scattered near and far: Gib Wheatley (Maureen), Mary Faith Roell (Mike), Ben Wheatley (Cassie), Britton Skarky (Michelle Russell), Ashley Higgins (Matt). The Grands: Ethan Roell (Madison), Sydney Wheatley, Anna Roell, Sam Wheatley (Callie), Cathryn Wheatley, Matthew Wheatley, and Jackson and Sophia Higgins. We will celebrate his life at 2 p.m., Friday, May 7th at Asbury United Methodist Church - Mason Chapel, 6767 South Mingo Road, Tulsa, Oklahoma. Please honor Dick by supporting the Tulsa Botanical Garden or Asbury United Methodist Church. And know that his favorite pal, Sooner, was waiting for him.
Friday
7
May

Look inside to read what others have shared
Family and friends are coming together online to create a special keepsake. Every memory left on the online obituary will be automatically included in this book.
View Tribute Book
Share Your Memory of
Richard
Upload Your Memory View All Memories
Be the first to upload a memory!
Share A Memory
Plant a Tree