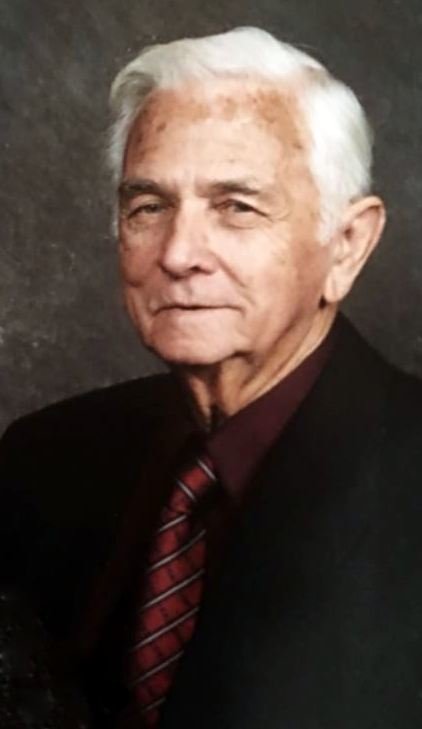 Please share a memory of Everett to include in a keepsake book for family and friends.
View Tribute Book
Everett Roach, Jr. was born September 15, 1924 in Leslie, AR to Everett & Ruby Myrtle (Bratton) Roach, Sr. and passed from this life on May 3, 2021 at the age of 96. Upon graduation from Russellville High School Everett joined the U.S. Army during World War II where he was stationed in the Mechanized Calvary driving an armored car. He earned the Bronze Star Award for unprecedented bravery during many successful campaigns; even participating in the Normandy Invasion. When he would speak of his efforts abroad he would only mention how often God had spared his life over and over. God’s faithfulness to him was Everett’s continued theme and hope. Back stateside Everett would paint homes and businesses up until the last weeks of his life. He had only recently thought of retirement enough to try it and immediately regretted it. The man lived to work! May he enjoy the eternal rest that he has entered into in the presence of the God he loved. Everett was preceded in death by his parents and his son, Everett Eugene Roach. He is survived by his wife of 50 years, Barbara Ann (Hart) Roach; his daughters and son-in-law, Judy Carol Elliott, Alice Ann Slemp and Angela Renee’ & Andrew Nguyen; his stepsons and daughters-in-law, Tim & Cynthia Johnston and Doug & Dee Johnston; his sisters, Doris Davis, Virginia Sue Robberson and Patsy Jean Cox and husband, Bill; his grandchildren, Michael, Chad, Jordan, Houston, Julian, Katrina, Nicholas, Cassie, Zack and Kristen; and his 15 great grandchildren. Everett will lie in state from 10-8 p.m. Thursday, May 6, at the Ninde Brookside Funeral Home with family receiving friends from 5-7 p.m. Following a private family graveside at Fort Gibson National Cemetery with military honors a Memorial Service will be held at 2:00 p.m. Friday, May 7 at the Owasso First Assembly of God, 9341 N. 129th E. Avenue, Owasso, OK. Ninde Brookside, 918-742-5556, www.ninde.com
Thursday
6
May