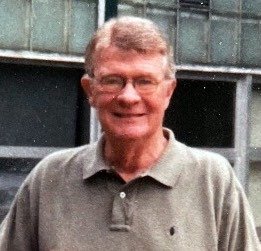 Please share a memory of George to include in a keepsake book for family and friends.
View Tribute Book
George Hadden Noland, 84, of Tulsa, Oklahoma, passed from this life August 02, 2021 at Saint Francis Hospital. He was born November 19, 1936 at Morningside Hospital in Tulsa, Oklahoma to George Noland, Jr. and Ruth Hadden Noland. George was a life-long Tulsan who attended and graduated from Lee Elementary and Tulsa Central High School. He worked in his father’s oil drilling business and attended Wentworth Military Academy before enlisting with great pride in the U.S. Army in 1956. George spent part of his service in Germany eventually becoming the commanding officer of a howitzer company. Upon his return to Tulsa, he completed his service with the U.S. Army Reserve. In civilian life, he was a clothes merchant, a businessman, and the prototype salesman. He had a passion for automobiles, OU football, his Irish heritage and antiquing. George was a great storyteller and punster and everyone who knew him loved his gregarious personality, positive outlook and will miss him greatly. His greatest passion was his family. He was a doting father, grandfather and great grandfather. George was preceded in death by his parents. He is survived by his younger sister Judith Irene Mapes, husband Bo, of El Paso, Texas; his two daughters, Stephanie Ruth Neagle, husband Michael, of Edmonds, Washington, Jennifer Lind Nightengale, husband Mark, of Tulsa; his two sons, George H. Noland II, wife Denise, of Claremore and David Alexander Noland, wife Jennifer, of Tulsa; his ten grandchildren, Gregory Montgomery, Kathryn Marranzino, Samuel Nightengale, Madeline Nightengale, Tobe Nightengale, Andrew Noland, Dalton Noland, Zachary Noland, Nicholas Noland, Audrey Noland; and his four great grandchildren; niece Gwenyth Mapes and nephew Christopher Mapes. In lieu of flowers please consider a donation to St. Jude, George’s favorite charity. There will be a private service with a reception held at a future date. Please share any special memories of George at www.ninde.com Ninde Brookside, 918-742-5556.