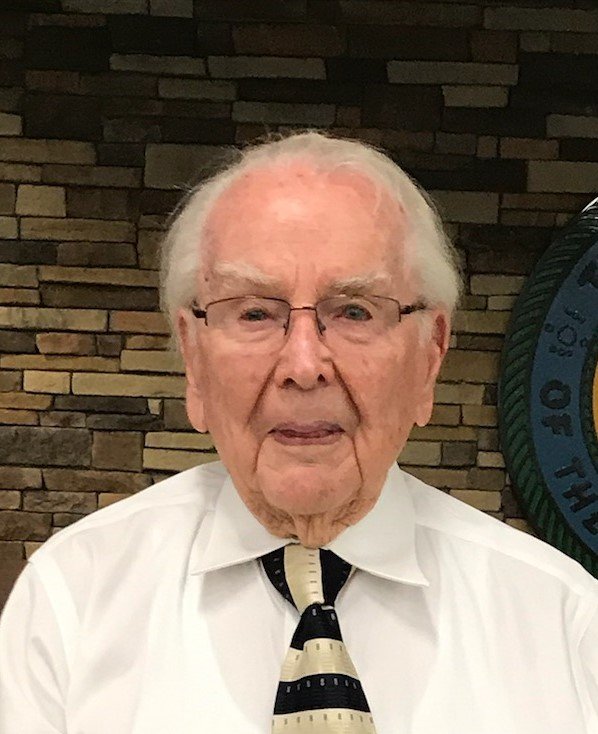 Please share a memory of Henry to include in a keepsake book for family and friends.
View Tribute Book
Henry Frank McCabe, 98, the son of William Thomas McCabe and Pearl Pierce McCabe was born in Cleveland, Oklahoma on September 3, 1922. He stepped through the Pearly Gates of Heaven at 12:15 a.m. on August 15, 2021, from room 407 of St. John’s Hospital in Broken Arrow, Oklahoma. There to meet him was Jesus Christ his Savior, his parents, his siblings John McCabe (Doris), Grant McCabe (Betty), Kenneth McCabe (Katherine), Velma Martin (Robert), and Tommy Cavin. His first wife: Phyllis Christine Kelso, an infant son Henry Frank Jr., his wife of 69 years, Jo Ann Shelton McCabe, and an infant daughter Marcy Ann McCabe. Henry attended Oklahoma A&M (now OSU) prior to enlisting in the U.S. Army Air Force in October of 1942. After an Honorable Discharge in January, 1946, Henry was engaged in management and sales of oilwell production equipment for more than thirteen years. In 1959, Henry made a career change and became V.P. and General Manager of Texas Mining Corporation, Dallas, Texas, which operated an oilwell frac sand plant and silica flour plant in Brady, Texas. Henry also served as V.P. and General Manager of Pulverized Sand Company, Riverside, CA, an affiliate of Texas Mining. In 1967, Henry became President and General Manager of Delta Mining Corporation, Mill Creek, Oklahoma, a producer of chemical grade limestone. Beginning in 1976, Henry served as President of McCabe-Woody and Company. In 1995, following the corporate restructuring, Henry assumed the role of Chairman and CEO of McCabe Industrial Minerals, Inc. and continued to focus his energies on corporate development until his death. Perhaps, it can be said that the measure of a man’s life can be determined more by the kind words and sentiments that follow him than accolades, degrees or worldly accomplishments that announce him. With that in mind, the following eulogies were posted on Facebook by family members: “Henry Frank McCabe was the absolute best…he never met a stranger; the moment he met you, you were family. He was brilliant…. His approach to business and how he maneuvered everything in life with purpose and a goal was inspiring. He never slowed down, always working to keep his mind sharp. He worked hard to build a life with tremendous blessings. He achieved that and much more. His heart was full of compassion and love. If he even heard of someone in need, whether it be they needed groceries, gas in their car (or a car) furniture, or just a little extra money until payday, he gave and gave and gave and gave…always making sure to give God all the glory. He was ninety-eight years, 11 months and 346 days young. His last words to me were: “I have lived a great life.” He most certainly did and a very blessed one indeed.”—Evie McPherson, granddaughter. “…This is his (Henry’s) legacy of a life lived on purpose: A generosity that paid no attention to returned personal gain. An unwavering energy to create and build and discover new things. A devotion to his personal faith in God that was neither dogmatic nor demeaning. An optimism fueled by a very short memory of failures or setbacks. An instant, persistent, fierce loyalty to family.” Henry Christopher McCabe, grandson. “…My DadDad, Henry McCabe…was one of the most incredible people you could ever hope to meet: smart as a whip, handsome, generous, and the ultimate problem solver. He never stopped learning, working and building for the future! He taught me how to play solitaire and dominoes, cook a mean Reuben sandwich, and how to spend your life taking care of others. He always called me his Tennessee gal.”—Maigan Jane McPherson, granddaughter. “My granddad. The man who taught me what it means to be selfless. The man who was always my biggest supporter, my number “1” fan. He taught me about forgiveness. He showed all of us the man he was, always humble, always kind. He would give the shirt off his back to someone in need. He would do anything for anyone. He loved giving, he never expected anything in return. He loved all his kids and grandkids and everyone in general. He never let any of us go without. …and I thank him for everything he’s done for me and everyone else. Now he gets to go to heaven and be with Nanee!” Isabela Miriam McPherson, granddaughter. Henry will be awaiting the arrival of the rest of his family and friends: His wife, Shanna, of the home. His brother-in-law Glenn Harrison, of St. Louis, Missouri. His children: Joan Owens, Austin, Texas, Verne L. McCabe (Rosemary), Broken Arrow, Oklahoma, Cathy McCabe McPherson (Mark) Atoka, Oklahoma and Karen Burrows (Brad) Davenport, Florida; 21 grandchildren, 37 great grandchildren and 1 great great grandchild, several cousins and many beloved nieces and nephews. Special friend and compadre Jerry Hamlin. Henry’s body will be laid to rest awaiting the Great Resurrection in Osage Cemetery, Osage Oklahoma. Henry Frank McCabe Son, nephew, cousin, uncle, student, soldier, husband, father, entrepreneur, businessman, grandfather, great grandfather, great great-grandfather, Baptist, patriot, Philanthropist, grantor of wishes, lover of souls Follower of Christ. In lieu of flowers donations may be made to Samaritan’s Purse International Relief at https://www.samaritanspurse.org/memorial-page/henry-f-mccabe-tulsa-ok
Print
Friday
20
August