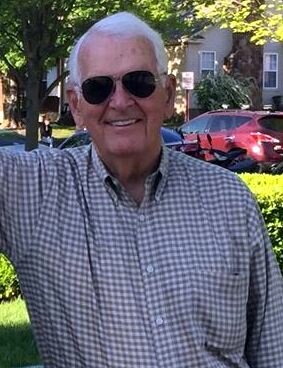 Please share a memory of Ed to include in a keepsake book for family and friends.
View Tribute Book
Longtime Tulsan, Eddie Lee Nunnelee, 88, husband of 62 years to Anne Nunnelee, and beloved to four children and 13 grandchildren, passed away peacefully at home on October 16, 2021, while watching his Arkansas Razorbacks. Born in 1933 to parents Willie Etta and Ocie Ray Nunnelee in Ft. Smith, Arkansas, Ed graduated from Ft. Smith High School in 1950 and went on to study Accounting at the University of Arkansas, where he was a Razorback yell leader and participated in ROTC. Following graduation in 1954, Eddie served in the United States Air Force for four years. He flew several different aircraft including his favorite, the Boeing B-47 Stratojet. After his service in the Air Force, Eddie joined IBM in Wichita, KS, where he worked for 28 years. Rising through the ranks, he held additional positions in Chicago, Kalamazoo, MI, and Tulsa, where he became known as “Mr. Walmart” within the company. Although they grew up two blocks from each other in Ft. Smith, it wasn’t until 1958 when Ed met Anne, the love of his life, on a blind date. They fell in love and were married three years later. They had four beautiful children and have spent the last 44 years together in Tulsa, where they have been engaged members of their community. A man of faith who was active in their church, Ed was always available to help others. He gave back by serving on the boards of Mainsprings, a nonprofit helping orphaned girls in the African nation of Tanzania, and the Tulsa Air and Space Museum and Planetarium. Ed loved a good project, playing golf and spending time with friends and family, especially in Crested Butte, Colorado, which was his favorite place in the world. Affectionately known as “Poppa” by his children and grandchildren, he’ll be remembered for his sarcastic wit, being patient, kind and forgiving, full of practical wisdom, meticulous and organized, and always sharply dressed. “Steady Eddie” was a man of the highest integrity with a reassuring smile. He will be greatly missed by all those who had the privilege of knowing him. Eddie is survived by his wife, Anne; his children Michael Nunnelee (Sabrina) of Tulsa; Susan Creidenberg (Jan) of Kansas City; Christopher Nunnelee of Stuart, Florida; and Matthew Nunnelee (Amy) of Kansas City. He is also survived by 13 grandchildren. A small family service was held on Thursday, October 21st at First Presbyterian Church of Tulsa. In lieu of flowers, the family suggests donations to Mainsprings, P.O. Box 4541 Tulsa, OK 74159.