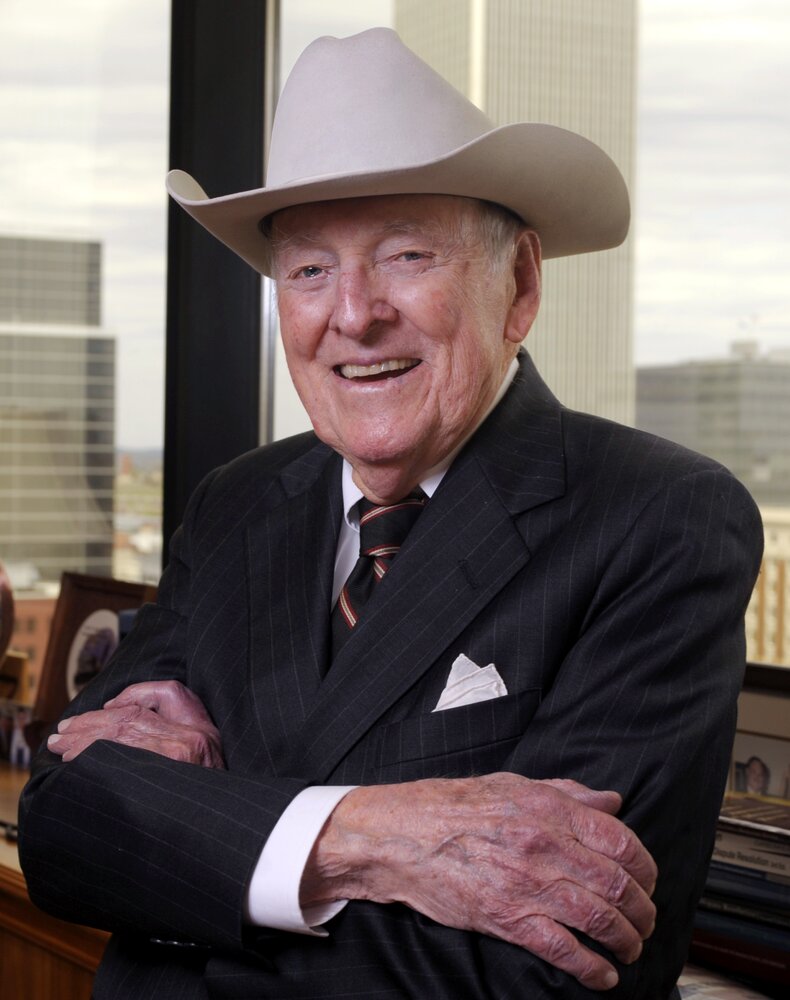 Please share a memory of Judge Joseph to include in a keepsake book for family and friends.
View Tribute Book
Judge Joseph W. Morris died on November 11, 2021 at age 99. He was born on April 28,1922 on a farm in Rice County, Kansas in in the same house in which his father was born in 1896. Joe attended grades one through eight in a one-room school to which he walked or rode his horse. He attended high school in Nickerson, Kansas. Thereafter, he received his baccalaureate degree from Washburn University where he was a member of Phi Delta Theta fraternity and Delta Theta Phi legal fraternity. After receiving his baccalaureate degree from Washburn, Joe entered the United States Navy during World War II. He attended Officer’s Training School at Ft. Schuyler, New York and was commissioned an Ensign. He was then assigned to serve on the staff of Admiral O.C. Badger in Honolulu, Hawaii. After the war, he returned to Washburn where he received his law degree, graduating first in his class. He was later inducted into the Order of the Coif at the University of Oklahoma. While in law school, he met Dorothy Deane Conklin, a student at Washburn. Following law school, he enrolled in the graduate program of the University of Michigan Law School where he earned an LL.M and an S.J.D. degree. After returning home from the University of Michigan Law School, he and Deane Conklin were married, and he joined the legal department of Shell Oil Company where he worked in both Tulsa and New York City for 12 years. Deane, to whom he had been married for 38 years, predeceased him. In 1960, Joe joined the legal department of Amerada Petroleum Corporation where he served as Associate General Counsel and General Counsel in Tulsa. In 1972, he was named as Dean of the College of Law of the University of Tulsa. In 1974, he was appointed United States District Judge for the Eastern District of Oklahoma. He served as Judge and Chief Judge until 1978, after which he was named Vice President and General Counsel of Shell Oil Company in Houston. Following his retirement from Shell, Judge Morris became a shareholder and member of the board of GableGotwals where he served until his death. Following the death of his first wife, Deane, Joe married Dona Frank on July 27, 1989. During his entire career, he had a keen interest in legal education and taught oil and gas law as an adjunct professor for more than 20 years prior to becoming Dean of the College of Law at the University of Tulsa. He taught a course in Arbitration Law at the University of Tulsa College of Law as an Adjunct Professor until shortly before his death. He was admitted to practice law in Kansas, Oklahoma, and Texas. He was listed in the publication The Best Lawyers in America in Alternative Dispute Resolution and in Natural Resources Law. During the last 28 years of his life, Judge Morris was heavily involved in international arbitrations. He was a member of the National Panel of Distinguished Neutrals for the International Institute for Conflict Prevention & Resolution. He was a member of the American Arbitration Association’s Large, Complex Case Panel of Arbitrators and its Energy Panel. He was a member of the Advisory Board of the Institute for Transnational Arbitration of the Center for American and International Law. He was an emeritus member of Rand Corporation’s Board of Overseers of the Institute for Civil Justice. He was a member of the American Law Institute, the American Bar Association, the Oklahoma Bar Association, and past president of the Tulsa County Bar Association. He was an Oklahoma Fellow of the American Bar Foundation, and a former chairman of the Natural Resources Law Section of the American Bar Association. Judge Morris was a former State Regent for Higher Education for the State of Oklahoma. He was a member of the Tulsa Hall of Fame. In addition to the law, Judge Morris was a great outdoorsman and loved hunting upland game birds, especially quail. He outlived many of his very close hunting partners and brought on younger ones to take their place. He was also an avid tennis player and fan. He was an active member of St. John’s Episcopal Church. He was a member of Southern Hills Country Club and The Summit Club. He had served on the board of directors of the Williams Companies and of Torchmark Corporation. He had served on the board of Stand in the Gap and as a trustee of Sarkeys Foundation. He was a lifelong Republican. Joe is survived by his wife, Dona, to whom he was been married for 32 years; his son, Jeffrey D. Morris of Houston, Texas; daughters Marilyn Morris of Tulsa and Jeta (Cynthia) Morris of Dallas, Texas, as well as stepdaughter, Terri Ramseyer and her husband, Roger Ramseyer, of Tulsa; Janna Frank of Hutchinson, Kan.; and Katie Frank of Wichita, Kan. He is survived by five grandchildren, Ryan Ramseyer and his wife, Abby; Emily Ramseyer; Gracie Frank Smith and her husband, Conner; Johnnie Frank IV; and Ellie Frank. Services will be held at 3:00 p.m. Wednesday, November 17 at St. John’s Episcopal Church at 4200 S. Atlanta Place in Tulsa. Family burial will be held Nov. 18 at Wildmead Cemetery in Nickerson, Kansas. In lieu of flowers, memorial gifts may be made to the University of Tulsa College of Law, 800 S. Tucker Drive, Tulsa, OK 74104 or Washburn University Foundation, 1729 SW MacVicar Ave., Topeka, Kansas 66604 for the Joseph Wilson Morris Endowed Fund. Ninde Funeral Directors, Brookside Chapel
Wednesday
17
November