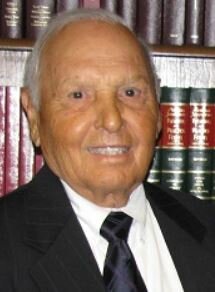 Please share a memory of Ray to include in a keepsake book for family and friends.
View Tribute Book
Ray Henry Wilburn was born February 5, 1928 in San Antonio, TX to Henry William & Mary (Maizumi) Wilburn and passed from this life on November 12, 2021 at the age of 93. Upon moving to Tulsa, Ray became an accomplished Golden Glove Boxer and then joined the U.S. Navy; serving on 4 different destroyers. Using the privilege of his G.I. Bill, Ray graduated from the University of Tulsa with a B.A. in Political Science in 1951 and received his Juris Doctorate from the University of Oklahoma College of Law with distinction. He received a Lifetime Achievement Award from Oklahoma Association of Defense Counsel 1999 to present. Ray was in practice with his partner Michael J. Masterson for over 40 years. He enjoyed golfing, snow skiing, canoeing and vacationing with his family on Padre Island in the Gulf of Mexico. Ray is preceded in death by his parents; his wife of 61 years, Barbara Nell (Alexander) Wilburn; his son, Rhett Wilburn; his brothers, John Wilburn, Will Maldonado, Henry Wilburn, Jr., and Joe Wilburn; and his sister, Olga (Wilburn) Gonzales. He is survived by his son, Rodney Wilburn; his daughter, Amber Rae Spencer; and his grandchildren, Austin Ray Wilburn, Tanner Cole Wilburn, Alexander Robert Wilburn and Hunter Michael Spencer. A memorial service will be held 2:00 p.m. Friday, November 19 at the Ninde Brookside Chapel, 3841 S. Peoria, Tulsa, OK. Ninde Brookside, 918-742-5556, www.ninde.com
Friday
19
November