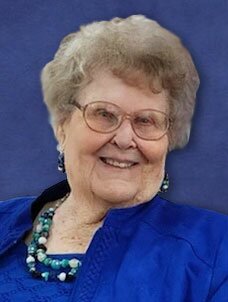 Please share a memory of Anita to include in a keepsake book for family and friends.
View Tribute Book
Anita Jo Wilson, 93, passed away peacefully on Friday, Dec. 3, 2021 at St. John’s Hospital, Tulsa, after a brief illness. Anita Jo was born April 12, 1928, to Guy and Delma McKenna Bebe. Raised in Tulsa, Jo attended Marquette School. She worked in the Kennedy Building downtown, later becoming a full-time homemaker, raising seven (7!) rambunctious boys, while also keeping up with her equally rambunctious husband. During those busy years, Jo not only kept them all well fed with her amazing fried chicken, she was also a Cub Scout Den Mother, PTA volunteer, and extraordinary seamstress, eventually sewing several bridal gowns for her soon-to-be daughters-in-law. Family fun included RV travel to Mexico, frequent fishing trips to Roaring River, MO; and many trips to the Indy 500 Races. As her sons grew up and left home, Jo and her husband, Buddy, became ardent TU fans, tailgating before every home game, and entertaining friends and family at their home on Lake Hudson. Jo was delighted to have her daughters-in-law join the family, and at finally being blessed with baby girls to dote on and make pretty dresses for. She was as proud of her grandsons as she was of her own sons and knew just how to entertain them after so many years of practice with her own. Jo enjoyed working outside the home at a Hallmark store, then took a medical transcription course and worked as a volunteer in the Recovery Room at St. Francis Hospital, a position she held for decades. Jo also chaired the Christmas Stocking committee there, making the Christmas stockings into which December newborns were nestled for their trip home from the hospital. Anita Jo resided at University Village for the last 12 years, where she enjoyed many friendships with residents and staff. She always had a smile for everyone, and her quick wit and humor were apparent even on her last day with us. Sister, Wife, Mother, Grandma, Great Grandma, Great Great Grandma and Aunt; Jo wore all of these titles with pride. Family was always her number 1 priority. She was dearly loved by her family and friends and will be greatly missed. She is survived by her sons: Gordon W. Wilson, III (Brenda), John Bradford Wilson, Richard Alan Wilson (Jamie), Paul Douglas Wilson (Melinda); niece, Patricia Lynn Brown (Bobby), her brother-in-law, the Hon. Mickey D. Wilson (Ann); 11 grandchildren, 14 great grandchildren, 5 great great grandchildren, and numerous nieces and nephews. Anita Jo was preceded in death by her husband of 61 years, Gordon W. (Buddy) Wilson, Jr.; her sister, Wilma Jean (Billie) Kline; and sons Peter Donald Wilson, Jeffery Scott Wilson, and David Michael Wilson. A Memorial Service is scheduled for Thursday, January 6, 2022; details to follow. A private family burial was held December 7, 2021, at Memorial Park Cemetery. Ninde Brookside, 918-742-5556, www.ninde.com