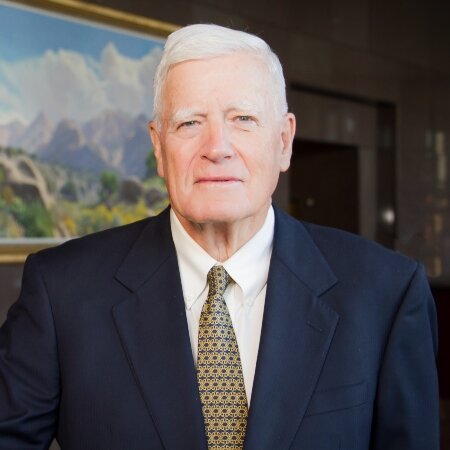 Please share a memory of Jim to include in a keepsake book for family and friends.
View Tribute Book
Jim Sturdivant, 84, passed away on November 24, 2021, in Arizona. He lived a vibrant life marked by service to his profession on a local, state and national level, the Tulsa community, his country and family. The son of Dr. Ben Sturdivant, a Methodist minister, and Elizabeth Carlock Sturdivant, Jim was born in Tulsa on September 14, 1937 and called several Oklahoma communities home before graduating from Enid High School in 1955. He went to the University of Oklahoma where he pledged the fraternity Sigma Alpha Epsilon and was a member of the R.O.T.C. Upon graduation from OU in 1959 Jim went into the U.S. Marine Corps as an officer. He was on active duty for two years - 15 months of which were spent in Okinawa. Jim felt that his service in the Marines was a defining experience. Already a disciplined man, the Marines emphasized teamwork, love of country, respect for others, duty and honor. These characteristics became the benchmarks of Jim’s character and life. Jim was a principled man whose integrity and dignity were exemplary. Beneath an exterior of strength and determination was a dear, kind heart. Following an honorable discharge from the Marines, Jim returned to OU and earned a Juris Doctor degree in 1964. He took his last law school final in Norman the morning of January 22, then, over the noon hour, drove to Tulsa and, that afternoon, began a distinguished career of 57 years at the law firm GableGotwals. He was an active partner until the time of his death. Jim believed in his clients and was their dedicated advocate. He was a sincere man who dealt in facts, always willing to listen, tough but fair and took the obligation of the attorney-client privilege very seriously. Many of his clients became close friends.  While Jim’s years at OU made him a staunch Sooner fan, he was actually a fan of any game that involved a ball. He played an excellent game of tennis and golf and was an avid competitor in both. For many years he was a runner with a distinguished group of fellow Tulsans that solved “the great issues of our times”. When the running days were behind him he switched to a coffee group that continues to solve the problems of the world. The friendships Jim made within these groups were dear to him. Jim loved to travel and he had many exceptional experiences as he welcomed new people and adventures into his life. He was a loyal, kind and supportive friend. He prized a great practical joke as either the recipient or the instigator. Jim and a cadre of friends continually devised schemes to harass one another in good fun. His keen sense of humor was a constant. Through all of Jim’s many accomplishments and activities, his family always came first. Jim married Barbara Dunn in 1978. He was a devoted husband who deeply loved and appreciated his wife of 44 years and his children, Katie, Anne, David and John. He was a caring and encouraging father who was very proud of his children and grandchildren, his great joy. He could think of no better way to spend time than to be with them. Jim is survived by his wife, Barbara; daughter Anne and children Emily, Tesakiah and Sara- Grace Harjo and great-granddaughter Aria Fry of Fayetteville, Arkansas; daughter Katie Fether, husband Steve and children Jason and Allison of Boulder, Colorado; son David Sturdivant, wife Brooke and children Mallory, Collins and Hayes of Tulsa; son John Sturdivant, wife Stephanie and daughter Virginia of Dallas, Texas; brother Tom Sturdivant and wife Deborah of Ft. Worth, Texas; brother-in-law David Stephens of Little Rock,Arkansas; sister-in-law Jane Rossiwall and husband Bernt of Telfes, Austria; brother-in-law Rex Dunn and wife Carole of Tulsa; brother-in-law Larry Dunn and wife Karen of Scottsdale, Arizona: and 11 nieces and nephews. A celebration of Jim’s life will be held on Monday, December 13 at 3:00 p.m. in the sanctuary of the Boston Avenue United Methodist Church, 1301 S. Boston Avenue, Tulsa. Contributions may be made in Jim’s memory to the Tulsa Area United Way, 1430 S. Boulder, Tulsa, OK 74119 or to the Boston Avenue Methodist Church, 1301 S. Boston Avenue, Tulsa, OK 74119.
Monday
13
December