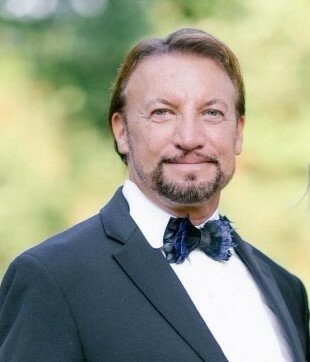 Please share a memory of Ray to include in a keepsake book for family and friends.
View Tribute Book
Raymond “Ray” John Hornak was born in Kansas City, MO on May 30, 1961, to Raymond E. and Rosemary Hornak. He attended Saints Peter and Paul Elementary School and Bishop Kelley High School. Ray received many awards throughout his life, but the one he was most proud of was being inducted into Bishop Kelley High School Hall of Fame for the countless hours he volunteered to support the school. Beginning his college career at Northeastern Oklahoma A & M College, in Miami, OK, Ray transferred to “God’s country” his junior year. Ray was a fan of the Sooners long before he attended the University of Oklahoma and considered OU football one of his greatest joys. The phrase “never met a stranger” must have been written with Ray in mind. He was a friend to all. His door was always open to anyone that needed a place to stay, no matter how long. Always the life of the party, it was impossible not to have fun when Ray was around. His energy and charisma were unmatched. His thoughtfulness and devotion to making others feel happy and included is something we should all try to emulate. He had a head for business, but his greatest successes at Hornak Sales were his relationships with their customers who became fast friends, then family. He had a heart full of love for his family and friends. His loyalty to them was unending; however, this was reciprocated, and he felt it. Ray had the hands of a servant. Although Ray’s booming voice and laughter could often be heard long before he was seen, he was much quieter about bringing attention to the organizations he served or the people he helped. The stories of his acts of kindness are endless. The world is a little less bright without our Ray. Ray is survived by his parents, Raymond E. and Rosemary Hornak; his son, Casey Baker and Casey’s sister, Taylor; Ray’s sister, Roseanne Hornak; his brother, Rick Hornak (wife Madeline); his nephew, John Hornak; niece, Cate Hornak; and many cousins. Last but, not least, Ray is survived by the love of his life, Cami Rogers. We will be forever grateful for the love and care she gave to him, especially during these past 30 days. In lieu of flowers, please spread a little “Ray” of sunshine with a random act of kindness to a stranger and donations may be made to Bishop Kelley High School or your local food bank. The rosary will be prayed for Ray 6:00 p.m. Thursday, December 9 at Ninde Brookside Chapel, 39th & South Peoria, Tulsa, OK. Ray’s funeral mass will be celebrated 11:00 a.m. Friday, December 10 at Church of St. Mary, 1347 East 49th Place, Tulsa, OK. Ninde Funeral Directors, Brookside Chapel (918) 742-5556
Thursday
9
December