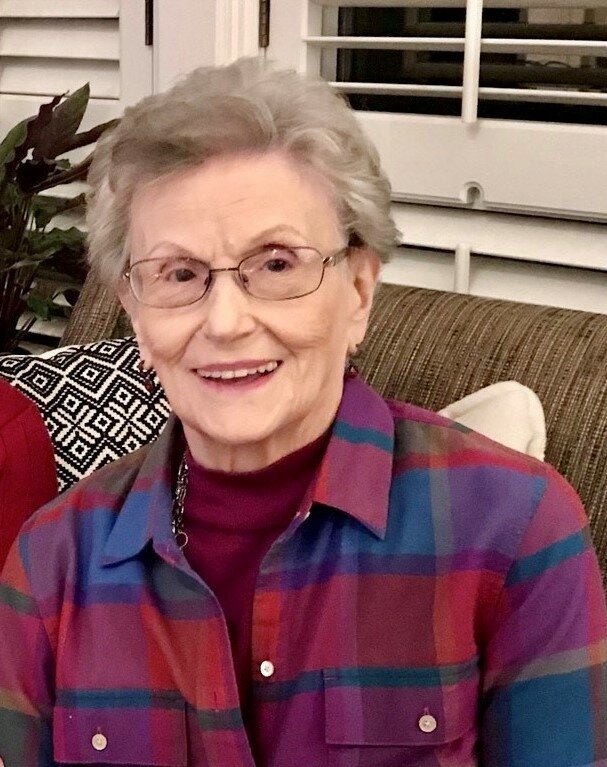 Please share a memory of Ruth to include in a keepsake book for family and friends.
View Tribute Book
Ruth Goodpasture, age 91 passed away peacefully at the Porta Caeli House in Tulsa after the sudden onset of pancreatic cancer. Born in Ashland, KS to D. Seth and Alma Lauver Ruth was the youngest of 5 siblings, Phillip, Norman, Bill, and Elizabeth. As the daughter of a school teacher and principal, the family relocated multiple times throughout western Kansas. In 1949-50 she attended nursing school in Wichita, KS, but gave up her passion after receiving a betrothal of marriage. Ruth was a dedicated partner in marriage to Russell L. Goodpasture for 66 years before his passing in February, 2016. Russell was a career Postal worker and Ruth was the homemaker. The couple had two children, Jane Ann (1952-2014) and Jim Lee 1955-present. Ruth was a natural at parenting. Her never ending kindness and compassion toward others was a model for her children to follow. Her innate nurturing offered support in their formative years, and her never ending encouragement gave them a confidence to succeed in life. Some of Ruth’s hobbies were needlepoint and sewing. She loved and exceled at making clothes for her grandchildren. In recent years, she was in the puzzle making club at her residence at Town Village. Ruth was a member of Will Rogers United Methodist Church in Tulsa. Left to mourn Ruth’s death and giving thanks for his life are her brother, Norman of Hutchinson, KS, sister-in-law Pat Lauver of Wichita, KS, son Jim (Velma) Goodpasture of Morgan Hill, CA, grandchildren Christa (Matt) Turpin of Tulsa, Jenny Goodpasture of San Leandro, CA, Jason Goodpasture of San Jose, CA, Julie (James) DelToro of San Jose, CA, 2yr old great grandson Hunter Turpin and 3 week old Julian Lee DelToro. Acknowledgment The Family will dearly miss “Grandma Ruth” and would like to express their sincere appreciation for all the sympathy, prayers and other forms of kindness expressed to us over the past few days. At this time no services are scheduled according to Ruth’s wishes.