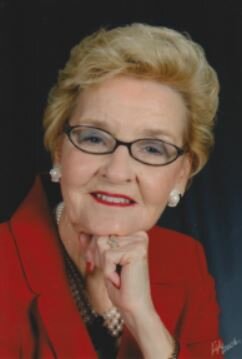 Please share a memory of Darlene to include in a keepsake book for family and friends.
View Tribute Book
Grace Darlene (Benson) Baker was born August 6, 1930 in Brooken, OK to George & Carrie Benson and passed from this life on February 16, 2022 at the age of 91. She attended high school in nearby Quinton, OK. Shortly after college Darlene moved to Oklahoma City where she met Richard on a blind date. It was love at first site and they were married two months later. They moved to Ft. Worth, TX where she began her career with Pan American Petroleum. They transferred to Tulsa in 1966 and eventually retired from Amoco Production Company. Many of the people she met at Amoco became lifelong friends. They traveled extensively in the U.S., Europe & Australia. Nothing made her happier than spending time with family and friends. She loved playing duplicate bridge and she obtained the goal of Life Master. She and Richard were long time members of Asbury United Methodist Church and active in their community, Happy Christians. Darlene is preceded in death by Richard A. Baker, Jr., her husband of 67 years; her parents and her siblings, Lee Benson, Rudolph Benson, Virginia Carlton, Ervin Benson, Wanda Gordon, Evelyn Benson, and Roland Benson. She is survived by her sister and companion Shirley Smith, daughter Paula and her husband Larry Moffett; son Greg Baker and wife Helen; her grandchildren, Ty and Melissa Moffett, Tara and Lantz Day, Catherine Baker and Travis Baker; great grandchildren, Henry and Calvin Day as well as numerous in-laws, nieces and nephews. All her family on both sides, Bakers and Bensons were very special to her. Darlene’s viewing will be held Monday, February 21, from 10:00 a.m. to 8:00 p.m. at the Ninde Brookside Funeral Home. A memorial service will be held at 12:00 p.m. Tuesday, February 22, at Asbury United Methodist Church in the Mason Chapel. She will be privately laid to rest at Floral Haven Memorial Gardens. If you would like to make a donation in lieu of flowers the family requests making a donation to the charity of your choice. Ninde Brookside, 918-742-5556, www.ninde.com
Monday
21
February

Look inside to read what others have shared
Family and friends are coming together online to create a special keepsake. Every memory left on the online obituary will be automatically included in this book.
View Tribute Book
Share Your Memory of
Darlene
Upload Your Memory View All Memories
Be the first to upload a memory!
Share A Memory
Plant a Tree