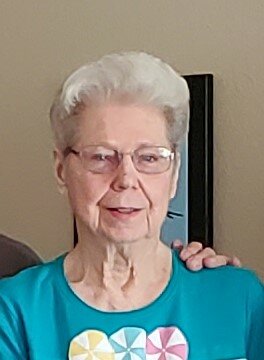 Please share a memory of Almeda to include in a keepsake book for family and friends.
View Tribute Book
On Friday, February 18, 2022, Almeda “Mia” Frances Roach, loving aunt, grandma, and friend to many, passed away in Broken Arrow, Oklahoma, at age 85 after a third battle with breast cancer. Almeda was born on January 31, 1937 in St. Louis, Oklahoma to Henry Ward Roach and Ethel Irene (Holley) Roach. She was the baby of eight children: Henry Novell Roach, Aubrey Deats Roach, Virginia Louise Fox, Margaret Kathleen Denton, Irene Willadean Pierce, Alfred Leon Roach, and Elnora Ruth Roach. Almeda graduated high school at St Louis, Oklahoma and then continued her education at East Central University, OSU, and OU earning her bachelor’s and Master's degrees in education. As witnessed at last year's Bedlam Football - she was always a Cowboys fan. Almeda began her teaching career in Choctaw, OK. She lived there with her brother Alfred and his family, and it was here that she began her lifelong friendship with Jim and Ginny Ivie. She then moved to Tulsa and continued her career in education serving as a teacher, school psychologist, and administrator until she retired. Not really ready to retire, she moved to Fayetteville, AR earning a second public school retirement before moving back to the Tulsa area where she remained until her death. Her passion for public education continued after retirement as she remained an active participant in her local PEO until her last couple years of life. Almeda loved traveling, caring for her flower beds, and spending time with family and friends. She was like a second mother to all of her nieces and nephews and their families. Always available to lend a helping hand, words of advice, material gifts, or the shirt off her back, she never turned down a friend or family member in need. In her last few years, she spent her time caring for her friend Ginny, frequently babysitting her great grandsons, Nickolas and Benjamin, chatting with friends and family, and loving on her cat, Miss Molly. A woman of love, generosity, and strength, Almeda made a lasting mark on the people whose lives she touched, if even for just a brief moment. Almeda was preceded in death by her mother and father, siblings, one nephew Jerry Pierce, life long roommates and friends Jim and Ginny Ivie, “adopted” daughter Suzie (Ivie) Forcina, and “adopted” granddaughter Ehren Lynn (Forcina) Pearson. She is survived by her nieces and nephews: Glenn Fox - wife Carol, Janice Lee - husband Eugene, Ward Denton - wife Jackie, Phyllis Williams - husband Jimmy, Linda Crane - husband David, Lynell Peterson - husband Doug, Henry “Butch” Pierce - wife Peggy, Larry Denton - wife Roberta, Elaine Roach, and Jack Pierce. She is also survived by her “adopted” family, son, Charles “Chuck” Ivie - wife Natasha, granddaughters, Kristen Couchot - partner Randy, Jennifer Ivie Barth - husband Brian, and Jodie Pyle - husband Casey, and grandson, Bryan Forcina - wife Samantha, and her many great grandchildren. A graveside service will be held on Monday, February 28, 2022 at the Tecumseh Cemetery at 2 o’clock p.m. Donations may be made to the American Cancer Society.
Print
Monday
28
February