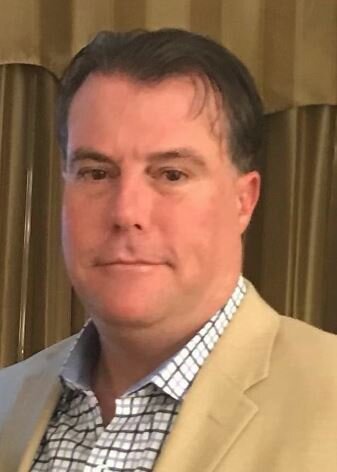 Please share a memory of Michael to include in a keepsake book for family and friends.
View Tribute Book
Michael Scott Jeter was born in Ponca City, Oklahoma on May 28, 1966 to Gerald Wayne Jeter and Carla Huffines Jeter. While he was in Tulsa for his Mother’s birthday, Scott passed away on Tuesday, February 8, 2022 at the age of 55. He attended Memorial High School and Oklahoma State University, where he was in the SAE Fraternity. After a career in medical sales, Scott was a salesman in the pipeline construction equipment industry, where he made many friends among the contractors. His job took him to the Houston area, where his family located in The Woodlands, his current home. He was a master BBQ chef and a wonderful host when he demonstrated his culinary skills. Scott had many longtime friends in the Tulsa area, whom he always looked in on whenever in Tulsa. Scott was preceded in death by his father, Gerald Wayne Jeter and all of his grandparents. He is survived by Laurie, his wife of 28 years; son, Brock; parents, Carla & Jim Solomon; brother, Steve Jeter and wife, Liz and their children Madison, Gabriel and Juno; step brothers, Bill Solomon and his wife Christy, Andy Solomon and his wife Lisa; step sister, Debbie Bunting; Laurie’s parents, Rod and Hannah MacDonald; uncle and aunt, Calvin and Sandi Huffines; cousins Robbin and Mark Huffines; brother-in-law, Stuart MacDonald and his wife Jean and their son, Nic Oliverie. Scott dearly loved his family and his friends, and they all loved him. He is greatly missed and will never be forgotten. Memorial services will be held Monday, March 7, 2022 at 4:00 pm in The Harvest at The Woodlands United Methodist Church, 2200 Lake Woodlands Drive, The Woodlands, Texas 77380. A memorial services will also be held 2:00 pm Saturday, March 12, 2022 at Kirk of the Hills Presbyterian Church, 4102 E. 61st Street, Tulsa, Oklahoma 74136.
Monday
7
March

Look inside to read what others have shared
Family and friends are coming together online to create a special keepsake. Every memory left on the online obituary will be automatically included in this book.
View Tribute Book
Share Your Memory of
Michael
Upload Your Memory View All Memories
Be the first to upload a memory!
Share A Memory
Plant a Tree