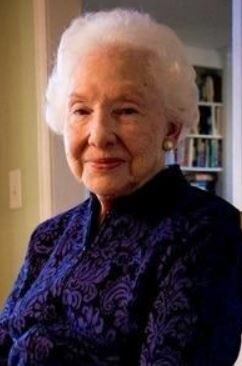 Please share a memory of Martha to include in a keepsake book for family and friends.
View Tribute Book
Martha Barr passed away on the morning of April 1, 2022 on the day after her 76th wedding anniversary to her beloved husband Arthur, who passed away in 2005. She was a sweet, kind, loving and caring woman and an example for all of us. She was born on February 2, 1924 in Sulphur Springs, Texas the 5th of 6 children of Ada and Brice Hicks. Martha worked in a dental office after her high school graduation at 16 years old. She met young Arthur Barr from Hope, Arkansas at the army base in Paris, Texas who courted her in the months before being shipped out to Europe. They married a few months after he returned from the war and lived in Columbia, Missouri while he finished his journalism degree. They lived in 3 small towns while he started his career in the newspaper business and had 3 children. The family moved to Tulsa in 1958 and they joined Southminster Presbyterian Church where Martha became an active and faithful member for the rest of her life. She was a person with a deep faith and became the first female ordained Elder at the church and was active in Presbyterian Women, Circle, Mariners, and Christian Education. For her 3 children Kathryn Barr Smith (David), Richard L. Barr, and Saletha Barr Fuller, her 5 grandchildren Becky Moreno, Amory Fuller (Amanda) Julia Weems (Jamie), Ryan Fuller (Holly), and Daniel P. Barr (Diana) and her 8 great grandchildren Taylor Moreno, Eliana Fuller, Robie Moreno, Elias Fuller, Jake Weems, Emelia Fuller, Ella Weems, and Jax Fuller she was the greatest. She never missed a birthday and always gave of her unconditional love. Martha was an avid tennis player, a great seamstress, an excellent bridge player, a good listener, always a volunteer and of service to others. She loved that she had been able to travel all over the U.S, Mexico, Hawaii, the Caribbean, and Europe and she was a friend to all who met her. When she returned to work in a dental office to help with college expenses, her ability to calm patients with her soothing presence was legendary. She was trustworthy, organized, patient, humble, dependable and always on time. Her family wants to thank the loving caregivers at Zarrow Pointe where she spent the past year. A Memorial Service will be held at Southminster Presbyterian Church at 11 AM on Thursday, April 28, 2022. In lieu of flowers please consider a memorial gift in her name to the church. Ninde Brookside, 918-742-5556, www.ninde.com
Print
Thursday
28
April