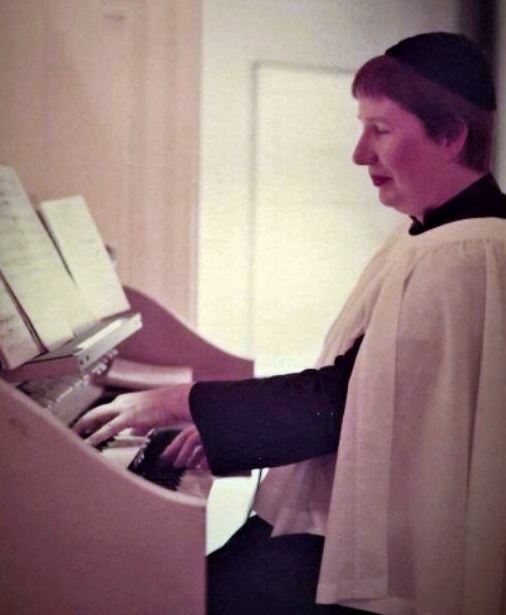 Please share a memory of Barbara to include in a keepsake book for family and friends.
View Tribute Book
Barbara Anne (Schisewski) Mattes was born January 29, 1932 in Chicago, IL to Henry August & Henrietta Martha (Rauch) Schisewski and passed from this life on May 1, 2022 at the age of 90. Barbara earned her Bachelor of Music in 1953 from the University of Dubuque (Iowa) and did her graduate work in organ at the American Conservatory of Music (Chicago, IL) where she studied with Dr Robert Lodine and at the Indiana University (Bloomington, IN) where she studied with Dr. Robert Rayfield. She gained her Certification in Orff-Schulwerk method of music education, taught music grades K-6 in Barrington (IL) Community Unit School District #220 from 1967 to 1993. Thanks to her advocacy, Barrington District #220 was one of the early US adopters of the Orff-Schulwerk method of music instruction. Barbara was a Charter Member of the Barrington Education Association, a Life Member of the National Education Association, organist/choirmaster at St. Mark’s Episcopal Church, Barrington Hills, IL from 1966 to 1986. She oversaw installation of the McGibbon Pipe Organ in 1979, served on the Music Commission of the Episcopal Diocese of Chicago and served as the organist/choirmaster at Episcopal Church of the Redeemer, Elgin, IL from 1992 to 1997. In addition, she was active in the American Guild of Organists (AGO), served as Dean of the North Shore Chapter (IL) of the AGO from 1971 to 1973 and was active in the Chicago Club of Women Organists. A passionate lover of the arts, Barbara was a season subscriber to the Chicago Symphony Orchestra, Lyric Opera of Chicago, and the Elgin (IL) Symphony Orchestra. After moving to Tulsa in 2015, Barbara was a season subscriber to the Tulsa Symphony Orchestra and attended many performances of Tulsa Opera. Preceded in death by her parents, Barbara is survived by her daughters and son-in-law, Martha Mattes and Ruth & John Ohlemeyer; her sister and brother-in-law, Helen & Martin Jelsema, and her grandson, Matthew Ohlemeyer. Requiem Mass will be held 4:00 p.m. Saturday, May 21, at Trinity Episcopal Church, 501 S. Cincinnati Ave, Tulsa, OK. Service will be live streamed on the Facebook page of Trinity Episcopal Church, https://www.facebook.com/trinitytulsa. Family suggests in lieu of flowers that donations be made to the Music Fund of Trinity Episcopal Church, 501 S. Cincinnati Ave., Tulsa, OK 74103 or Saint Simeon’s Senior Community, 3701 N. Martin Luther King Blvd., Tulsa, OK 74106. Ninde Brookside, 918-742-5556, www.ninde.com
Saturday
21
May