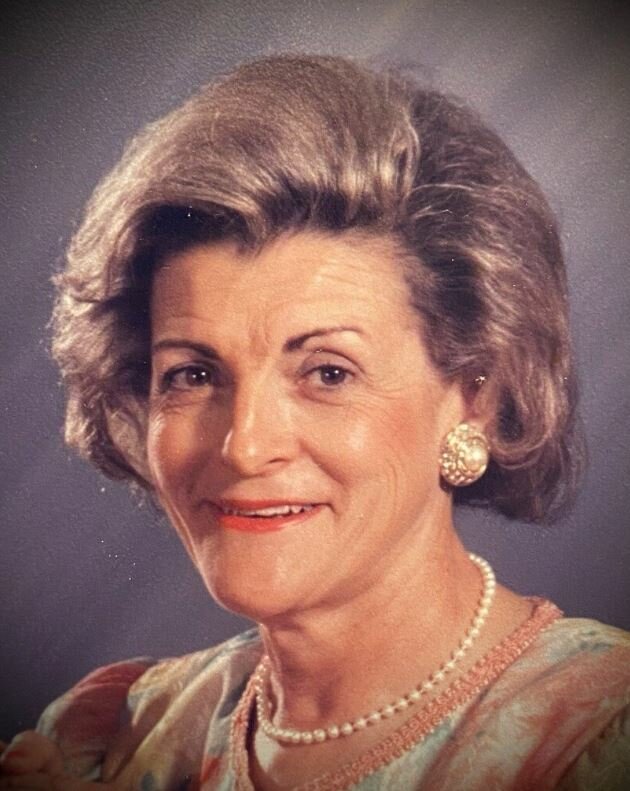 Please share a memory of Bonnie to include in a keepsake book for family and friends.
View Tribute Book
After living a beautiful life of 91 years, Bonnie Louise (Cron) Ruble died peacefully on July 15, 2022. She was born on August 12, 1930 in Van Horn, Texas to Dr. Charles Fletcher Cron and Margaret Floy (Mossman) Cron. Bonnie grew up in the small coastal town of Rockport, Texas with her sister Charlotte and brothers John and Tom. Before graduating in January 1953 from the University of Texas at Austin, Bonnie married Texas A&M graduate, and newly commissioned army officer, Charles Robert (“Bob”) Ruble on September 1, 1951 in Fort Sill, Oklahoma. Bob soon shipped out in February 1952 for 10 months of artillery combat in Korea, while Bonnie returned to Austin to complete her degree. In 1954, Bonnie gave birth to daughter Ann and Bob resigned from the army to join Southwestern Bell Telephone Co. Then followed 16 moves in 22 years (mainly in Texas), as Bob progressed through a series of assignments and Bonnie gave birth to sons Robert, David, and Dan within a 39-month period. She particularly enjoyed the two-year stint in the New York City area. She always embraced the moves with such enthusiasm that the kids never thought to worry. The moving ended in 1967, when Bonnie and Bob arrived in Tulsa to set down roots and raise the family. She spent the next 55 years with Tulsa as her adopted home. The travels did not stop, however, as Bonnie became a constant advocate for travel adventure. She camped, backpacked, and skied throughout the Rocky Mountains, toured Europe extensively, worked on mission trips in Russia, Croatia, Costa Rica, and Oklahoma, and cruised and traveled around much of the world. Most of all, Bonnie loved visiting her children and grandchildren wherever they were: Oklahoma, Texas, Boston, London, New Orleans, Vermont, Chicago, Michigan, South Carolina, and Florida. When not traveling, Bonnie wrote letters, read books, played piano, swam, danced, played tennis, cared for her family, volunteered, and worked. She was an elementary school teacher with the Tulsa Public Schools for 16 years. Bonnie was an active member of Kirk of the Hills Presbyterian Church for 54 years. She taught Sunday school, vacation bible school, new member classes, and tutored underprivileged children. As an Elder, Bonnie chaired the mission committee. She enjoyed several bible study groups and the Kirk dinner club. Bonnie was the Kirk librarian from 1986 until recently, helping to expand the library from a small workroom into a main library with over 4,000 books and a separate children’s library. Over the years, she also enjoyed volunteering at the Children’s Day Nursery, Emergency Infant Services, Kiwanitas, and serving as a docent at Philbrook Museum. Bonnie was full of energy, love, kindness, and patience. She was boundlessly helpful and had an infectious positive outlook. Bonnie displayed her Christianity by her love. Bonnie is survived by daughter Margaret Ann (Ruble) Hight of Perry, OK; son David B. Ruble and wife Judith (Harshman) Ruble of Destin, FL; son Daniel B. Ruble and wife Sharon (Smiggen) Ruble of Tega Cay, SC; six grandchildren: Brandon Hight and wife Tara (Diel) Hight, J.B. Ruble and wife Leslie (Hughes) Ruble, Bonnie (Hight) Casteel and husband T.J. Casteel, Sara Ruble, Clare Ruble, and Charlotte Ruble; eight great-grandchildren: Dylan and Kennedy Hight, Drake and Sawyer Donnell, and Matt, Annie, Libby, and Ladd Casteel. Bonnie was preceded in death by her husband of 63 years, Bob, her son Robert Edward Ruble, her son-in-law M. Timothy Hight, her parents, her sister Charlotte Ann (Cron) Mixon, and her brothers John S. Cron and C. Thomas Cron. A memorial service will be held at 1:30 pm Friday, August 5, 2022 at Kirk of the Hills Presbyterian Church in Tulsa, OK. In Bonnie’s memory, friends may contribute to Goodland Academy, P.O. Box 1056, Hugo, OK 74743-1056, a charity of their choice, or simply read a good book.
Print
Friday
5
August