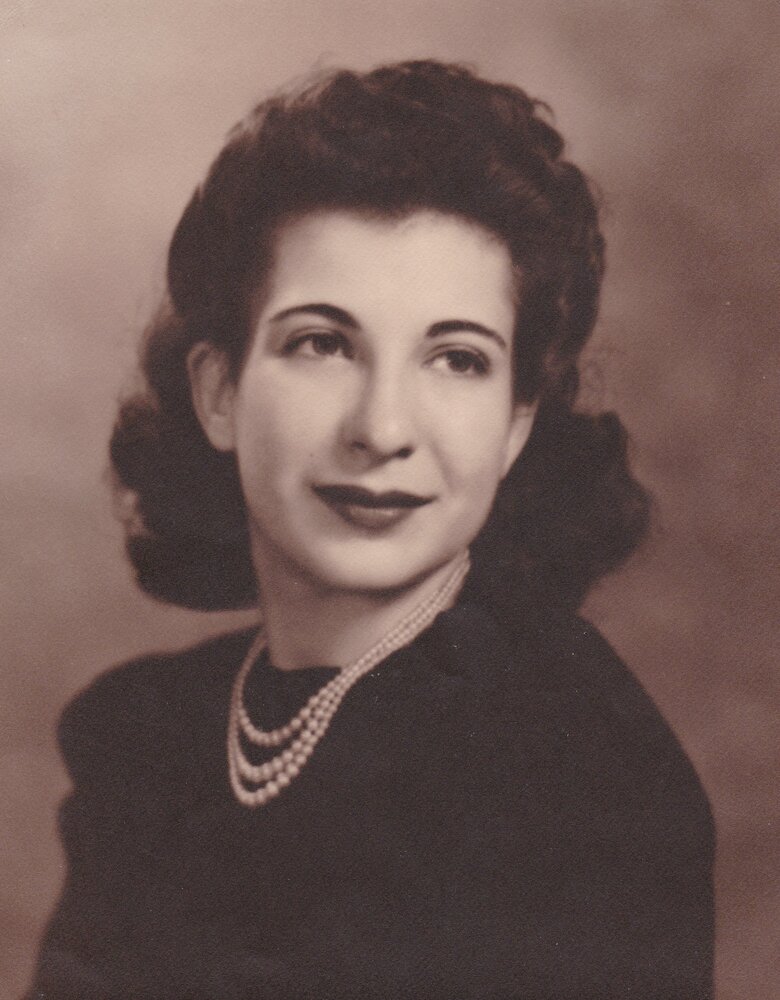 Please share a memory of Marina to include in a keepsake book for family and friends.
View Tribute Book

Marina Ann Metevelis – Age 100, fell asleep with the Lord on January 14th, 2023. Marina was born on March 25, 1922 and raised in Wichita, Kansas. Her Greek immigrant parents struggled to raise their family during the depression and fought against bigotry and discrimination at the hands of the Ku Klux Klan. Marina was raised in the Eastern Orthodox Christian faith and that faith helped her through many trials and hardships. Marina lost her youngest brother, Paul, when he was killed in action on Iwo Jima. She lost her sister, Eleni, 20 years later. Marina did her best to raise her sister’s children as well as her own. Marina then moved her parents to Tulsa to take care of them. She even took care of her Aunt Mary. Marina liked to help everyone, she rarely said no.

She was preceded in death by her brother Pvt. Paul Balafas, USMC, her sister Eleni Kavras, her parents Constantine and Anna Balafas, her Aunt Mary Athas, her husband Don G. Metevelis, and her son D. George Metevelis.

During WWII, Marina answered the call to duty and signed up to work in the Boeing bomber factory. She went to work after high school each day working on B-17 bombers. She met the love of her life Don Metevelis who lived in Tulsa and they married on December 4th, 1942 at the Tulsa County Courthouse. Marina then followed Don to Tennessee where he was training with troops for the D-Day invasion. She slept in rented and shared rooms with other Army wives and families for the next 6 months. At the urging of the local priest, they were married at the Greek Orthodox Church in Memphis, Tennessee on June 5, 1943.

Marina traveled with Don to New York when he was leaving for the war. His troop ship was so large that he didn’t know his brother Pete was sailing with him. Marina spent the next two years in Wichita working at Boeing as a rivet inspector on the B-17’s (she truly was a “Rosie the riveter”). Her only communication with Don was letters they wrote to each other for the next two years.

The family waited with great anticipation for news after D-Day. Marina received the telegram from the War Department telling her Don was wounded on Omaha Beach. But, Don chose to stay in the war because the Infantry needed officers. Don was wounded a second time in a battle at Saint George’s del. This telegram was more detailed this time and they didn’t know if Don would survive his injuries. Marina knew she had to deliver the news in person to Don’s parents, so she rode a bus from Wichita to Tulsa. When she walked up to her in-law’s house, her father-in-law, George Metevelis, saw her and immediately started crying. While Marina cried with him, her mother-in-law Helen Metevelis told Marina not to cry, that it was probably just a ”scratch”. After Don came stateside, he spent the next two years in an Army Hospital in Salt Lake City. Marina lived close by the hospital and volunteered for the Red Cross.

When they returned to Tulsa, there was no money for Don to go back to business school to become a C.P.A. The Post office was hiring and Marina told Don he should take the civil service exam to try to get a job. Don started as an accounting clerk and in 1963 became the Assistant Postmaster of Tulsa. Marina worked on and off for a florist and raised lots of beautiful flowers at her home. Her love of plants led her to “Up With Trees” where she was a founding member. She started working at TCC in 1970 when the college opened its doors. First in the library and then the Heritage Center. She retired after 47 years of service to the school.

Marina was the kind of Mom where other kids gravitated to her house. When her son and his acting friends from the High School Plays fell asleep on the living room floor, Marina would walk thru and drop blankets on them. She attended all sporting events, recitals, scouting events, cheerleading, gymnastics and anything her kids were involved in. And she fed everyone. Her children were baptized at Holy Trinity Greek Orthodox Church and attended the youth events and Sunday School. It was a common sight to see Marina working at the Greek Festival every year.

Marina was one of the nine original “Rosie the Riveters” still alive today. When her granddaughter Katrina saw a B-17 at the airport, she asked her Yiayia, “How come those old planes can still fly?” Much to Marina’s delight, Anna said, “because those planes were built by WOMEN like your Yiayia”.

When Marina slowed down in her 80’s, she danced in the TOSS swing dance group and loved the music of the 40’s and the Big Band era. Marina didn’t like to miss a dance as she was in her element.

During her last couple of years, Marina often told her daughter that she did not need a caretaker. However, the family has to thank TPD Detective Linda Hanna, Karen Parsons, Lanaisha Smith, Nancy Makar, Kim Wiley, Christine Penick, Jacqui Hull, Amie Knapp, Annie Liu and Lavonne Fleming for their excellent care and love for Marina. Many other people looked out for Marina which her family deeply appreciates.

In lieu of flowers, please make a donation to Holy Trinity Greek Orthodox Church or the VFW Post 1577 in Tulsa.

Marina always did everything – her way. She drove her car even when she wasn’t supposed to. She slept on Star Wars sheets. She hardly ever missed a lunch at the VFW. Her common phrase was, “I’m doing all the damage I can”. Here’s to our Marina - a life well lived. We will miss you.