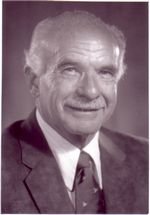 Please share a memory of Donald to include in a keepsake book for family and friends.
View Tribute Book
Ruggles, Donald H., 85, passed on to Our Lord on Sunday, September 18, 2005. A graduate of Oklahoma Military Academy and the University of Tulsa, Don spent most of his adult life in Tulsa as co-founder of Ventaire Corporation and a member of Young Men's Club of Tulsa, Tulsa Men's Club, Harvard Club and Tulsa Ski Club. Don was a kind and loving man, a true gentleman, the pillar of his family and we will miss him deeply. God bless you, our sweet Don. Preceded in death by his brother Bob Ruggles and daughter Elaine Erwin and preceded in death by his parents, Dewey and Mildred Ruggles. Survived by: his wife Fredalene; son Don Jr. and wife Nancy of Denver, daughter Diane McCormack and her husband John of Tulsa, son Randy of Denver; sister, Mrs. Wallace Lane, Moses Lake, WA; grandchildren Scott, Elyse, Courtney, Gillian, Chloe, Derek, Lisa, Nicole and Lacey; great grandchildren Blake, Brody, Jordan, Chelsea, Keely, Zoey, Brianna Elaine. We will celebrate his life at 11:00am Thursday, September 22, 2005 at Boston Avenue United Methodist Church. Contributions to the American Cancer Society or Hospice Association are appreciated. *Ninde Garden Chapel.