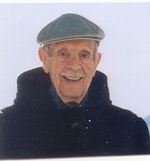 Please share a memory of Ernest to include in a keepsake book for family and friends.
View Tribute Book
DICKERSON - Ernest &quot;Roy&quot; was born November 24, 1912 in Norwich, Norfolk, England. He died on October 3, 2005. He married Rita on December 26, 1935. They were happily married for 45 years until her death. They had three children: Marion Safford of Virginia Beach, Lynn Khouzam of Fresno, CA, and Jill Gibbs of Fayetteville, AR., and nine grandchildren. Having moved from England to Canada to Ohio and Oklahoma, he was a longtime resident of Tulsa. Roy was an active member of St. John's Episcopal church and participated in several Christian churches. During WWII in England, Roy helped design the Spitfire and worked on numerous design projects with McDonald Douglas, Boeing, and Lockheed as an Aeronautical engineer. He traveled to numerous US sites for his work. After retirement, he traveled overseas with his second wife Charlotte (of 18 years) until her death. His presence, wit and compassion will be sorely missed by his daughters. We are thankful we know he is in the presence of the Lord. Funeral service 2:00 PM Thursday, October 6, 2005 at St. John's Episcopal Church. Interment at Memorial Park Cemetery.