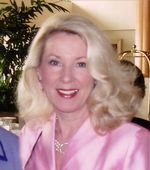 Please share a memory of Nancy to include in a keepsake book for family and friends.
View Tribute Book
Nancy Brazier Green passed away on October 21, 2005 surrounded by family and friends after a brief battle with kidney cancer. She was born in Oklahoma City on July 12, 1944 to Louise and Dalton Brazier. After spending the first two years of her life in Fort Worth, Texas she came back to Oklahoma with her mother and spent her childhood living with her mother and her maternal grandparents along the Illinois River south of Tahlequah. She received her early education in a one room school where her mother taught grades one through eight. After a brief stay in Little, Kansas, Nancy and her mother moved to Tulsa and Nancy completed her secondary school education at Will Rogers High School as a member of the class of 1962. Northeastern State University was the next step in her education ladder and she left there in 1966 with a teaching degree in Spanish and French. Nancy began her teaching career at Nathan Hale High School in the fall of 1966 and at the same time launched a life long love affair with teaching and the Spanish language. Her love of language was personified by her extensive summer-time studies at universities in Mexico, Spain, France and Austria and the completion of a masters degree in Spanish Literature at the University of Oklahoma in 1979. When she wasn't attending universities in the summer she was often taking students on trips to Mexico or countries in Europe. Her professional career was marked by many notable efforts including being one of the original volunteers in 1973 to participate in the development of the magnet program at Booker T. Washington High School where she piloted the school's AP Spanish Program. She later played a prominent role in the opening of Westmoore High School in Moore Oklahoma in 1988, headed up the development of a model bilingual program at Millikan High School in Long Beach California, and spent six years as the curriculum leader for the foreign language department of the Long Beach Unified School District. During the last two years of her professional career journey, she had a very rewarding experience at Cascia Hall Preparatory School doing what she loved and was born to do, teaching Spanish and enhancing the lives of her students and colleagues. In 1983 she married H.J. Green and she became an integral member of the extended Green family. Some of her happiest moments were related to family functions related to holidays, ski trips, OSU athletic events, trips with her grandchildren and shopping with her daughters-in-law and niece. Nancy and H.J. shared a passion for travel, adventure and accepting new challenges. This shared passion led them to travel extensively to Mexico, Central America, Canada, Asia and Europe. Their domestic travel found them visiting forty six of the fifty states and numerous stays in Washington DC, New York City, Boston, Chicago, and San Francisco. The passion for new challenges led them in 1991 to begin new education related careers in Long Beach California. During the years they spent in Long Beach they were heavily involved in community activities highlighted by her work in Cameo, an Assistance League auxiliary organization, that specializes in assisting women who are victims of domestic violence and providing support for needy high school students in Long Beach. She was preceded in death by her mother, Louise Brazier, aunt Patricia Peebles of Andrews Texas and uncle Sidney Scott of Bartlesville. She survived by her husband H.J. ,stepsons Eddie Green and his wife Connie of Wakita Oklahoma, Eric Green and his wife Beth of Tulsa, Jon Green of Tulsa, six grandchildren Kyle, Kelli, Ryan, Erin, Kristina and Kayla, a niece who was like her sister Carol Green of Bartlesville; uncle, Charles Scott and aunt, Zelda Scott of Tahlequah; uncle, George Peebles of Andrews Texas; aunt, Geanie Scott of Bartlesville; nine first cousins and many friends and colleagues. A funeral service is scheduled for 10:00 AM Tuesday at Ninde Garden Chapel with bural at Memorial Park Cemetery. In lieu of flowers, donations may be sent to the Oklahoma Educational Memorial Trust Foundation, PO Box 470208, Tulsa, OK 74147.