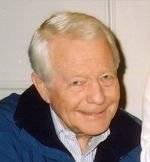 Please share a memory of Homer to include in a keepsake book for family and friends.
View Tribute Book
Martin, Homer D., 72, passed away on Friday, October 21, 2005 after a valiant battle with cancer. He was born on November 27, 1932 in Green City, MO to Frank and Lillian Martin (Swanson). He attended Hickman High School in Columbia, MO and graduated from the University of Missouri, Columbia, MO. Homer served in the United States Marine Corps and also as a pilot for the U.S. Navy. He married Suzann Carey, his wife of 48 years, on August 17, 1958. Homer and Suzann moved to Tulsa in 1967 where he eventually owned and operated a medical supply business. He was involved in various orgnaizations: Phi Delta Theta Fraternity, Masons and Visiting Nurse Association. Homer never met a stranger; he will be missed by his friends and the countless people he met through church and various business ventures. Homer is survived by his beloved wife, Suzann; son and daughter-in-law Daniel and Elizabeth Martin, of Tulsa; daughter and son-in-law, Carey and Darren Murphy, of Grayslake, IL; 4 grandchildren, Sarah and Roby Martin, Katie and Brandon Murphy. He also leaves behind his mother; Lillian Swanson, of Columbia, MO; brothers, Sam Martin, of Colorado Springs, CO and John Martin, of Columbia, MO; half brother, Mike Swanson, of Columbia, MO and half sister, Pat VanBooven, of Columbia, MO. Those who wish are invited to contribute to Cancer Research. Homer's memorial service is scheduled for 1:00 P.M. Monday, October 24, 2005 at Boston Avenue Methodist Church. Ninde Garden Chapel, 742-5556. www.ninde.com.