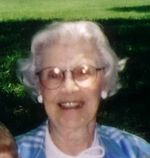 Please share a memory of Mary to include in a keepsake book for family and friends.
View Tribute Book
Winslow, Mary Josephine Hudson, 92, daughter of Edward Everett Hudson, Sr. and Sarah Howse Hudson, was born on June 24, 1913 in Altus, OK. Her grandparents were pioneer settlers in southwestern Oklahoma. Her father was the civil engineer who built Lake Altus. She graduated from Central High School in Cape Girardeau, MO and then attended the University of Missouri, graduating from O.U. in 1936 with a BS degree in Secondary Education. She received her MS degree in Elementary Education in 1964 from Indiana University of Pennsylvania. With teaching certificates for Oklahoma (life certificate), New Mexico, Missouri and Pennsylvania, she taught school in New Mexico, St. Louis, MO and Indiana, PA. Honors included membership in Delta Kappa Gamma Educational Society and in Kappa Delta Pi Educational Honor Society. Selected as Teacher of the Year by the Pennsylvania Council for Geographic Education she was honored at the National Convention for Elementary Geography. In Tulsa she was a member of DAR and St. John's Episcopal Church. Married to David C. Winslow on May 23, 1936, who preceded her in death and also by a sister, Virginia Larimer. She is survived by their two sons, David E. Winslow, retired District Judge and wife, Kathy, of Tulsa, OK and Phillip H. Winslow, M.D., of Ponca City, OK; granddaughters are Laurie Winslow and Jennifer Winslow Philp, and husband Tom, of Tulsa, OK. Grandsons are Matthew W. Winslow and wife, Karen, of Annapolis, MD and Paul H. Winslow and wife Lisa, of West Milford, NJ. Great Grandchildren are Hudson and Cora Belle Winslow of Maryland, Luke Winslow, of New Jersey and Joshua Philp, of Tulsa, OK. Other survivors are her sister, Melba Livermore, of Sapulpa, OK and her brother, Edward Hudson, of Tulsa, OK. Private family services are scheduled. Ninde Garden Chapel of Tulsa are in charge of the arrangements 918-742-5556