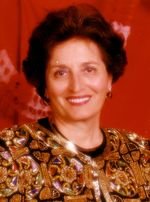 Please share a memory of Amanda to include in a keepsake book for family and friends.
View Tribute Book
Andrew, Amanda Belbas, 79, fell asleep in the Lord on Tuesday, November 15, 2005. Amanda was born December 4, 1925 in Sioux Falls, SD the daughter of John A. and Helen (Sarris) Belbas. She moved to Tulsa in 1946 where she has been a very active member of Holy Trinity Greek Orthodox Church and its organizations. She worked for over 40 years for the Disler Corporation. Preceded in death by her son, John Nicholas Andrew, her husbands Nicholas Andrew and Paul Mihos; sister, Theresa Klemons and brother, Thomas Belbas. Survivors: Daughter, Christine Andrew Deaver and her husband Robert of New York City; her sons: George Andrew and his Nancy of Plano, TX, Bill Andrew and his wife Karol of Tulsa and James Andrew and his wife Susan of Trumbull, CT; Sisters: Peggy Belbas of Tulsa, Bea Kustas of Poughkeepsie, NY and Kathy Griffith of Sioux Falls, SD; Brothers: Ted Belbas and George Belbas of Sioux Fallas, SD, and Dean Belbas of Minneapolis, MN; 10 grandchildren; and a host of other relatives and close friends. Trisagion prayers will be said Thursday at 7pm and the funeral will be Friday at 11am. Both services will be at Holy Trinity Greek Orthodox Church. Interment Rose Hill. Memorials: Holy Trinity Greek Orthodox Church Building Fund, 1222 S. Guthrie, Tulsa, OK 74119