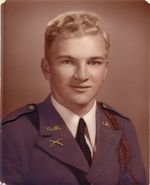 Please share a memory of John to include in a keepsake book for family and friends.
View Tribute Book
YEABOWER, Ltc. John Anthony joined his Lord early Thanksgiving morning, November 24, 2005, at the age of 74. He is survived locally by his loving wife, Sheri Yeabower; daughter Julie Yeabower and her husband Brian Blagowsky; son John A. Yeabower, Jr., and his family in Muskogee. Jay is also survived by a host of family and friends from Alaska to New Hampshire, especially his devoted brothers Don and George Yeabower in Destin Florida. He graduated from the University of Maryland with a degree in drama and joined the United States Air Force where he proudly served as a decorated fighter pilot including two tours of Viet Nam with the Special Forces Unit. He flew every plane imaginable with the exception of the Space Shuttle. He was a career Air Force man who served his country with honor. Jay enjoyed golf, playing bridge and spending time with his family. He loved to laugh, play piano, and tell jokes. He will be greatly missed by those who love him. A funeral mass and reception will be held Wednesday, November 30, 2005, 9 am, Saint Mary's Catholic Church. Ninde Garden Chapel.