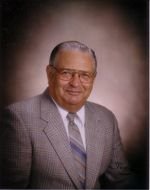 Please share a memory of Dwight to include in a keepsake book for family and friends.
View Tribute Book
Dwight Emerson Cacy, 78, was born to Oral and Zoe Cacy in Cedar County, Missouri on September 19, 1927 and passed on December 3, 2005 after a valiant, lengthy battle with cancer. He graduated from Will Rogers High School, Tulsa, OK in 1945 and then served in the US Navy on the U.S.S. O'Brien from 1945-1947. Continuing his education, he received his BS and MBA in Accounting from Tulsa University and received his C.P.A. from Northwestern University Graduate School of Business in 1968. He served as the President of the Lima, Ohio Chapter CPA's in 1978-1979. He had a successful career at Marathon Oil Company for 35 years, starting as an accountant in Tulsa, OK, promoted to a Division Controller in Casper, Wyoming, and eventually serving in Findlay, OH as Controller of the International Subsidiary, a Corporate Manager, and finally as the Manager of Accounting Policy and Research, retiring to Owasso, OK in 1986. During his retirement, he enjoyed traveling in his motor home and spending time with those he loved most, his family and friends. He is survived by his wife, Eula Jean (Smith) Cacy, four children: Ron (Kathy) Cacy, Brenda (Denny) Schey, Sheryl (Gene) Pore, and Diane (Dan) Wienczkowski, and fifteen grandchildren: Annette Horstman, Sherri Reed, Ronda, Justin , and Travis Cacy; Jessica Stoddard, Ryan , Derek, Katelin, and Joshua Schey; Andrea Nagy and Kari Lora; Michael Fagan, Danie and Dave Wienczkowski, and ten great-grandchildren: Alissa Cacy, Kody Horstman, Tylor, Drew, Dallas, Marshall, Laken, and Cami Reed, Mitchell Nagy, and Sammy Stoddard. He is also survived by his siblings Gerald (Dean) Cacy, Wanda (Herman) Hampton, Carolyn (Oren) Doerr, Art "Chuck" (Judy) Cacy, nieces and nephews, and was preceded in death by both parents and a brother, Dwayne Cacy. Memorial contributions may be sent the Cancer Treatment Research Foundation, 1336 Basswood Road, Schaumburg, IL 60173. Funeral service Wednesday, Decemeber 7, 2005, 12:00 p.m., Memorial Park Cemetery Chapel, interment in Memorial Park Cemetery Ninde Garden Chapel. 742-5556