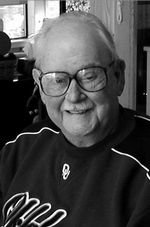 Please share a memory of Arthur to include in a keepsake book for family and friends.
View Tribute Book
Arthur B. &quot;Buster&quot; Childers, age 92, beloved father, grandfather, and great grandfather, died January 10, 2006. He was born to Robert L. and Stella Childers in Finley, OK on December 25, 1913.Arthur proudly served his country in World War II in the 45th Division of the U. S. Army. He was in active combat for 531 days, was in four campaigns including Sicily, Salerno, Anzio, and Southern France after first training in North Africa. He was a Purple Heart recipient for being wounded twice in battle. He retired from Safeway Stores after 31 years as a meat cutter. He was a faithful member of Immanuel Baptist Church for over 60 years. He was preceded in death by his beloved wife of 58 years, Jewell; daughter, Mary Jane Wildermuth; his parents and four brothers. He is survived by his son and daughter-in-law, Robert and Alice Childers of Cookson, OK; son-in-law, Mark Wildermuth; grandchildren Robert P. and Abby Lynn Wildermuth of Grand Junction, CO; Annette Bruski of Tulsa, OK, Deborah Chandler of Dallas, TX and Joe Masnica of Salt Lake City, UT; great grandchildren, Shane and Tim Bruski, and Sarah, John, and Grace Chandler. Family will receive friends 6-8 p.m. Friday Ninde Garden Funeral Home. Services will be held at 11:00 a.m., Saturday, January 14, 2006, at Immanuel Baptist Church interment at Floral Haven Memorial Gardens. Ninde Funeral Directors, Garden Chapel 918-742-5556