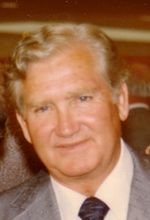 Please share a memory of Gomer to include in a keepsake book for family and friends.
View Tribute Book
Gomer Evans is gone. And he went exactly the same way he lived his life, on his terms and with his own self-determined, uncompromising spirit. He &quot;moved on,&quot; as he put it, February 9, 2006 in the comfort of his own home with his wife and daughter at his side. He left with no regrets and secure with his life and the fantastic ride he had. He is gone but is not and will not be forgotten. Gomer was born in Broken Arrow, Oklahoma on June 1st, 1921 to Lark and Nell Evans. He grew up in Skiatook Oklahoma, where he rode the family horse to school, and later he attended Tulsa Central High School. He enjoyed great success in Boxing's Golden Gloves. The Tulsa World's sports editor B.A. Bridgewater was a great champion of Evans' ability in the ring. On August 16, 1941 he married Eloise Masters. They shared a love affair that lasted over 60 years. Shortly after taking a bride, he joined the U.S. Navy and was stationed in San Diego. After the Navy, he returned to Tulsa, where he started a family and a business. The business was a used Cadillac dealership, which prospered on route 66. He became know as the Mayor of 11th Street. He was very involved with the growth of Tulsa, one of the first clients at F&amp;M bank and trust company on Harvard, where he was instrumental in their growth. In the 1950s he became involved in Quarter Horse racing and had the World's Champion, Palio Pete. In 1962 Evans received his first Trainer's licensee and he started a career as an owner, breeder, and trainer of Thoroughbred race horses. He traveled all over America with his horses, generating remarkable prosperity in such a difficult and competitive business, winning 1000s of races. Gay Revoke, owned and trained by Evans, is the only horse to have ever won the Oaklawn Handicap two years in a row. Numerous times he was named Owner/Breeder of the year in Arkansas. Many a Tulsan would ask Evans for a &quot;tip&quot; at the track, and he would always do his best to give them a winner. He was a great contributor to the development and expansion of horse racing in Oklahoma. He continued on the Thoroughbred circuit until 1995, when he retired. Evans also ran a working ranch at 171st and Lewis, running cattle. He never missed a day going down and checking on his cows. He is survived by this wife, Eloise, sons; Gomer Jr. "Pat", Curtis, Leo, daughter; Cathey Crow, and a sister Nadine Frye, all of Tulsa, and he has 8 grandchildren and 8 great grandchildren. He was proud of his accomplishments and his family and worked very hard to see both prospered. He will be greatly missed by those that knew him. Gomer Evans was a Tulsa original. Ask anybody Services will be Monday, February 13, 2006 at 11:00 a.m. in the Ninde Garden Chapel with interment to follow in the Memorial Park Cemetery. Memorials may be made to the charity of one's choice.